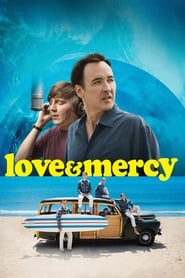 The Beach Boys have been a lifelong favorite of mine ever since I was a child singing along to "Kokomo" from their 1989 Still Cruisin' album. The band's song-writing visionary, Brian Wilson, is a master of orchestral arrangements and vocal harmonies who's repeatedly proclaimed that his brilliant ideas spawn from the music he hears in his head. Needless to say, Wilson's admitted history of audio-hallucinations and multi-year recluse lifestyle in the 1970s landed him on the doorstep of radical therapist, Dr. Eugene Landy, which sets the table for Bill Pohlad's newly released musical biography, Love & Mercy.

As a non-chronological examination of the songwriting icon, Brian Wilson (played by Paul Dano and John Cusack), Love & Mercy tackles one of the most bizarre real-life stories of manipulation. Wilson pushes musical boundaries when he produces Pet Sounds, what would become one of the greatest rock albums ever written, but the repercussions of his psychedelic drug use cripples his psyche and makes him extremely vulnerable. Years later, his most trusted confidant, Dr. Landy (Paul Giamatti), has brainwashed Wilson and taken complete control over every aspect of the musician's life. All until Brian meets a spirited woman, Melinda Ledbetter (Elizabeth Banks), who discovers Landy's unnatural stranglehold and tries desperately to open Brian's eyes to this unsettling reality.

Love & Mercy is a surprisingly artistic biopic that jumps back and forth between the rise of Wilson's creative emergence and his over-medicated, prison-like lifestyle during the 1980s. Despite the film's erratic maneuvering between timelines that never feels as fluid as it should, engrossing performances from both Paul Dano and John Cusack keep the audience entangled in this peculiar true story. Fans of The Beach Boys, and more particularly Pet Sounds, will find themselves completely enamored by the film's 1960s storyline, even though John Cusack's portion of the feature feels barren and incomplete. Perhaps the most interesting story lies somewhere in between these over a decade-spread chunks of Wilson's life. Either way, Love & Mercy is an unevenly paced, yet still still effective, piece of dramatic filmmaking.