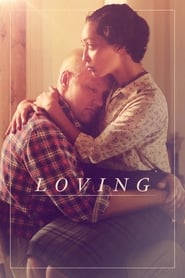 Generally speaking, the only way a film has been released by July and possesses some serious Oscar potential, is if it premiered at the prestigious Canned Film festival. All of the above hold true for a director I've long vouched for and respected, Jeff Nichols, and his powerful dramatic release, Loving. The film centers around a real life civil rights struggle, the type of story that makes Academy members salivate, making it completely understandable why the film has been handed the "Oscar contender" label.

Once Richard Loving (Joel Edgerton) discovers that his African American girlfriend, Mildred (Ruth Negga), is pregnant with their interracial child, the couple ventures to Washington, D.C. to obtain a marriage license. Yet, when they return to their small town Virginia home, local law enforcement arrests them for violating state law that prohibits interracial marriage. Richard and Mildred embark on a long and tireless court battle for their own civil rights that goes all the way to the United States Supreme Court.

As a long time admirer of filmmaker Jeff Nichols, thanks to an impressive catalog that includes indie hits such as Take Shelter and Mud, words can hardly describe my eagerness to catch his first legitimate Oscar-contending feature. With Loving, Nichols stays true to his indie roots and wavers from any semblance of a main-stream vibe. He keeps the experience intimate and authentic, peeling off layers of his characters as their unfair and unjust punishment for true love unravels itself. Joel Edgerton and Ruth Negga both give soulful performances that could very well turn them into Oscar finalists. Negga feels like a safer bet for major recognition, as both the stronger character and female role. And while Loving is a sweet and moving civil rights tale, the story isn't filled with many compelling or iconic moments. Therefore, Loving plays as a painfully slow true story that's told with grace and respect, but very little entertainment value.