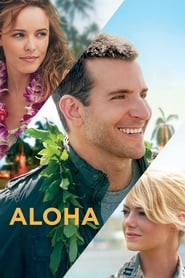 I recently chronicled the highlights of writer and director, Cameron Crowe's, impressive career. With films such as Jerry Maguire and Almost Famous sitting atop his long list of achievements, it's obvious that Crowe's skilled at creating and telling an exceptional story. I suppose that's why the erratically pieced together and messy new effort, Aloha, is such a disappointment to longtime fans of his work.

Bradley Cooper dominates the screen time as Brian Gilcrest, a military contractor who returns to the island of Hawaii where he left a remarkable amount of baggage with an ex-lover (Rachel McAdams). To further complicate the situation, while dealing with his latest assignment, Gilcrest unexpectedly falls for his military liaison, Allison Ng (Emma Stone). Brian soon discovers that you have to let go of the past before you can move on with the future.

At first glance, I was completely on-board with everything surrounding Aloha. The trailer looked great and the film carefully sat in the hands of an accomplished filmmaker who was working with an unbelievable cast including Bill Murray, Alec Baldwin and Danny McBride (in addition to the A-List stars already mentioned above). Unfortunately, though, Crowe spoils the moment with a head-scratching backdrop that offers very little relevance to the misguided story that's already in place. At its core, the love triangle scenario is by no means uncharted waters. Therefore, how you connect the dots becomes so vital to the film's success, and I'm not sure Cameron Crowe was even working with "dots". And he certainly wasn't connecting anything, leaving Alohaas a jumbled mess of a romantic comedy that only shines as bright as its performances can take this feeble script.