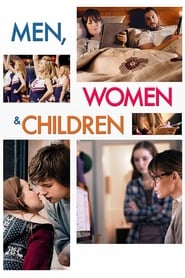 Just prior to the onset of the Philadelphia Film Festival, I was able to catch a screening of Jason Reitman's technology centered drama, Men, Women & Children. Reitman's career got off to a brilliant start with adored titles such as Thank You for Smoking, Juno and Up in the Air, all of which represent a caliber of filmmaking that catches people's attention. However, Reitnman's more recent work has fizzles into mediocre lately with last year's Labor Day and now his newest release.

Weaving together multiple interconnected stories between local families in a small community and the effects that technology has on their lives, good or bad, Men, Women & Children is an ambitious attempt that never feels as grand as its obvious intention. Adam Sandler embraces a return to dramatic acting and performs well in his role as the husband of a distanced couple who both test the extramarital affair waters. Yet, the most intriguing story of the bunch comes from two phenomenal young talents, Ansel Elgort (The Fault in Our Stars) and Kaitlyn Dever (Short Term 12 and Laggies), who most effectively capture the emotions of the audience. However, their gripping love story can only take the film so far and Men, Women & Children is otherwise bogged down by multiple hollow stories.

Reitman's ambition is certainly commendable, yet his final result never quite stacks up. 2013 delivered a similar themed film called Disconnect that also shed light on technology's powerful force on human life and interaction, but did so in a much more impressive fashion. While I would suggest skipping on Men, Women & Children, I highly recommend seeking out Disconnect for anyone interested in the film's subject matter.