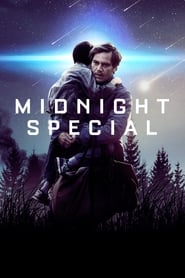 Another under-appreciated director whose valuable films have impressed indie audiences worldwide is Jeff Nichols. The supernatural thriller, Take Shelter, is an emotional masterpiece and the more well-known, Mud, is a strong feature in its own right. I was less surprised to discover an April release date for Nichols' newest sci-fi effort, Midnight Special, especially since his work hasn't garnered much Oscar love over the years. However, that still couldn't deter my overwhelming interest in this mysterious drama.

A father (Michael Shannon) and his young son (Jaeden Lieberher), who possesses rare other-worldly powers, go on the run from both a fanatical religious sect known as "The Ranch" and government officials. Communicating with forces well beyond our comprehension, Alton has a specific destination in mind and his biological parents must take any means necessary to guarantee their child's safety from other entities who don't completely understand his abilities.

Jeff Nichols adds another solid effort to his repertoire, although Midnight Special is a far cry from the best we've seen from this filmmaker. The entire cast delivers stellar performances, especially the talented youth, Jaeden Lieberher. Yet, Nichols massively embraces the element of mystery to his film and conjures up a story that's just enough for audiences to follow, but perhaps never enough to fully comprehend. From an emotional standpoint of Midnight Special's characters, the film achieves everything it sets out to accomplish. However, its sci-fi backdrop leaves far more questions than answers. This ambiguity will surely repel some audiences, but I wasn't particularly burdened by the unresolved. Instead, I was disappointed at how little I was emotionally invested in the characters, since that's a large staple in all of Nichols' previous films. Midnight Special is a well-made and compelling feature but, unfortunately, it offers little more than that.