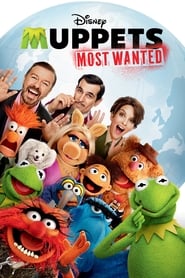 After the inarguable success surrounding Jason Segel's long-developed return of Jim Henson's iconic Muppets in 2011, it became inevitable that there was no escaping a sequel. However, with Segel worn out from years of carefully honing each and every colorful joke enjoyed in The Muppets, he respectfully stepped away from the project. And although the highly anticipated follow-up, Muppets Most Wanted, is still a worthy addition to the storied franchise, the film never quite reaches the heights of its immediate predecessor.

Muppets Most Wanted picks up exactly where the last movie ended. Fresh off of their return, Kermit and the gang decide to plot a sequel that takes the lovable cast of characters on a world tour throughout Europe. After the naive hiring of an evil manager named Domonic Badguy (Ricky Gervais), Kermit becomes entangled in a mistaken-identity fiasco that lands him in a dangerous Russian prison with no way of escaping.

As expected, Muppets Most Wanted carries out its usual calling-card of family-friendly humor and entertaining musical numbers. The sequel doesn't quite stack up to the 2011 revival, yet the film manages to operate swiftly and provide a surplus of laughs. Another impressive aspect is the enormous amount of star-studded cameos scattered throughout the movie, ranging from P Diddy, to Usher, to Lady Gaga and a whole lot more. In fact, a huge part of the fun becomes pinpointing all of the celebrities as they quickly arrive and then disappear from the screen. Thankfully, Muppets Most Wanted stays true to its mold and concludes as another enjoyable effort that stands tall on its own.

If there's one major detractor to this 2014 follow-up feature, it's a weak story that works better in theory than execution. The whole Constantine-Kermit identity switch-a-roo begins well but never really sustains as a central focus to the film. Instead, the audience must rely on typical Muppet humor that we've grown accustomed to over the years and a diverse collection of well-constructed songs from Oscar-Winning songwriter, Bret McKenzie. Despite the Constantine storyline never amounting to much, there are still plenty of other shining factors to Muppets Most Wanted that keep it enjoyable for the whole family.

With very little circulating through cinemas right now, you'd be well served by taking a chance on a worthwhile sequel such as Muppets Most Wanted. It may lack the charm and surgeon-like attention to detail of Jason Segel's 2011 rebirth, but writer/director James Bobin and co-writer Nicholas Stoller stick to the usual Muppet-mantra. And as my sentimental connection to these crazy characters remains strong, it's a staple that I continue to appreciate.