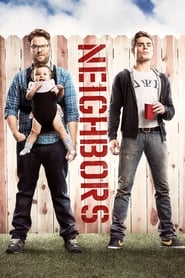 I've been known to argue in favor of Seth Rogen as an underrated actor. I've always appreciated his knack for generating laughs, but it was his role in the cancer drama 50/50 that shed a new light on his career. Then there's director Nicholas Stoller. If you were to ask me to name my favorite comedy of the last five years, without hesitation I'd say Stoller's hilarious debut film, Forgetting Sarah Marshall. Needless to say, news of Rogen and Stoller's first actor/director collaboration, Neighbors, appeared too good to be true. And after catching an advanced screening of the comedy this past week, I have to admit that the laughs are never ending.

Rogen and Rose Byrne star as a suburban married couple raising a newborn baby girl. But when the house next door to them is purchased by a fraternity set on throwing the most legendary of parties, the couple must decide whether to rekindle their youth or openly embrace adulthood. Yet, once they decide on the latter, demanding peace and quiet from their rowdy new neighbors may prove to be more difficult than they imagined.

After a surprise screening at the SXSW Film Festival, the buzz for Neighbors exploded beyond belief. Although the product was unfinished at its premier viewing, mainly due to some sound mixing and editing that needed to be fine-tuned, the crowd still went completely insane for the feature. Neighbors is an outrageously hilarious and hard-earned R-rated effort that constantly delivers the goods. It's easy to detect the large amounts of comedic improvisation that occasionally feel forced, but often lead to some of the film's most memorable one-liners. Rogen is in typical form and Byrne proves to be a more than worthy complement to the film's leading star. And if fistfuls of raunchy jokes and crude crowd-pleasing humor aren't enough, Neighbors does an admirable job of creating depth to all of its central characters. A feat that's clearly vital to the movie's overall success.

Despite an undeniable barrage of humor, Neighbors gives off the vibe that it's constantly trying too hard to elicit laughter from its audiences. Like a free-swinging featherweight boxer relentless in its pursuit, it shouldn't go unrecognized that the film misses on many of its jokes as well. Neighbors barely gives the audience any room to breathe or a chance to let the humor settle. There's an art to setting up a joke, but this feature avoids such creativity and decides to solely generate laughter with non-stop banter and shock value. However, when all is said and done, Neighbors' pros far outweigh its cons and audiences can rejoice in another stellar comedic effort from director Nicholas Stoller and his cast.

Seth Rogen's latest work isn't going to revolutionize comedy or break any barriers, yet the movie clearly delivers a healthy dose of laughter. If you have an appreciation for vulgar R-rated humor, then Neighbors will satisfy your comedic craving. If not, then I suggest looking elsewhere because, with this film, what you see is what you get.