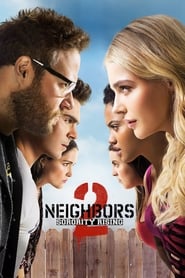 Nicholas Stoller's Neighbors was a successful summer comedy back in 2014. But despite the film's strong box office totals and well reception, it hardly felt like a starting point for a franchise. Apparently Stoller and his starring talent, Seth Rogen, Rose Byrne and Zac Efron, believed differently. All return for the newly released sequel, Neighbors 2: Sorority Rising, and the film shockingly surpasses tempered expectations.

After finally ridding themselves of their hellish fraternity of neighbors, parents Mac and Kelly (Rogen and Byrne) are trying desperately to sell their home before baby number two arrives. However, once a set of buyers put a strong offer on the house, the couple needs to withstand a 30 day inspection period before it's officially sold. Suddenly, a budding new sorority dead set on partying like crazy moves in right next door, putting the entire transaction in jeopardy. Therefore, Mac and Kelly must join forces with an old friend, Teddy (Efron), in order remove their latest lousy neighbors.

Structurally, Neighbors 2 is pretty run of the mill and exactly what you'd expect. Yet, where the film truly sets itself apart is in its clever writing that has plenty to say about modern day sexism and societal double standards. Its metaphors and reflective humor provides an added level of creativity that solidifies Neighbors 2 as a rare, welcomed sequel. The film's trio of stars all deliver acceptable performances that actually develop the characters further, rather than relying on recycled jokes from its predecessor. Neighbors 2 is far from a comedy classic, but it's still a strong follow-up feature that holds up all on its own.