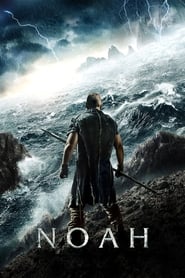 If 2014 is any indication of where the future of cinema is headed, brace yourself for a huge religious movement. Mel Gibson's 2004 The Passion of the Christ became such a financial success that movie studios could no longer ignore the widespread audiences biblical films attract. Fast forward a decade and films like Son of God, Ridley Scott's Exodus and Darren Aronofsky's Noah headline a trio of bible-centered stories that are primed for big box-office results this year. While I haven't always been enamored with religious tales brought to the big screen, at least Darren Aronofsky puts a unique spin on the well-known story of Noah.

After the dawn of man Adam and Eve spawned many children, three of which are known as Cain, Abel & Seth. Their first-born child, Cain, killed Abel out of jealousy and god cursed the land for his unrighteous actions. Meanwhile, Seth's descendants were appalled at the wickedness of Cain's ruthless bloodline and segregated from them to reconnect with god. Generations pass and Noah (Russell Crowe) is a born descendant of Seth who is surrounded in a world consumed by sin and hatred. He receives a premonition from the creator that a flood is coming to destroy all of mankind. With the help of "fallen angels", Noah builds an ark to withstand the storm and save the earth's creatures and his family from god's wrath.

Darren Aronofsky's fascinating interpretation of the story of Noah is brought to life in a compelling fashion. Many people have discussed Aronofsky's lifelong obsession with this biblical tale, evident in a nationally recognized prize-winning poem the director wrote as a 7th grade student (story HERE courtesy of ACESHOWBIZ). His passion makes for an intriguing watch as this epic adventure breeds an enormous amount of life to the film's title character. Russell Crowe is on-point in his depiction of the psychological and emotional struggles Noah endures on his path to serving the creator. Aronofsky's rare vision of an unrighteous and industrialized world is both unique and eye-opening, serving as a worthwhile bridge to the feature's amazingly executed visual effects. The flood sequences look phenomenal and take Noah's story down an unforeseeable path that drive the movie well past the two-hour mark.

For all its glory, Noah is far from a flawless effort. The Black Swan director certainly initiates some head-scratching with his fantasy-like approach to this biblical tale. In a very Tolkein-esque manner Aronofsky introduces computer-generated creatures that allow the building of the ark to make sense, but add a ridiculous mystic vibe to the film. This aspect will ruin the experience for some, and be easy to overlook by others. Furthermore, Noah's near two-hour and twenty minute journey is difficult to withstand at times. Although its crawling pace begins as a nuisance, the lull manages to directly elevate the third act of the film which is a bit of a redemption to the picture.

With this recent surge in religious movies, I fear sitting through a non-stop "preachy" experience. Noah was none of the sorts. It's a straight-forward interpretation that rarely (if at all) uses the word "god". I appreciated the cumulative story and found the conclusion to pack a punch. It comes with its blemishes, but Noah is full of enough special effects and creativity to satisfy the average moviegoer.