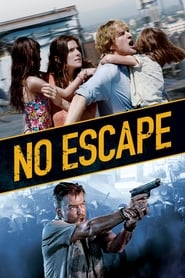 If you've seen the trailer for No Escape, then you've probably scratched your head at the casting choice of funnyman Owen Wilson. In all fairness to Wilson, he does a reasonable job in the film's leading role and never feels like a distraction. In fact, he's a bright spot by comparison to the many shortcomings in John Erick Dowdle's No Escape.

After relocating his family to an unnamed southeastern Asian country for financial reasons, Jack (played by Wilson) tries to make the best of his new situation. Yet, to the family's unfortunate surprise, an uprising of local militia result in a coup of the government and force Jack to find any means necessary to survive and protect his family.

Never before have "conveniences" played such a pivotal role in a film. Since there's absolutely zero character development and plot to latch on to, No Escape devotes itself solely to the art of suspense. Thankfully, Dowdle achieves success in this realm through the use of conveniently timed occurences, but building a tense atmosphere is just about the only aspect of No Escape that shines. As I previously stated, a paper-thin script gives Wilson and his usually terrific co-star, Lake Bell, absolutely nothing to work with and the film suffers immensely. Coupling that brutal fact with a cartoon-ish performance from Pierce Brosnan and No Escape comes and goes as a run of the mill thriller that fails to separate itself from the pack.