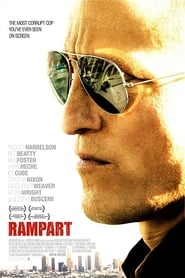 I'm sure if you ask Leonardo DiCaprio and the mastermind who's often filming him on the other side of the camera, Martin Scorsese, they'd tell you that they believe in destiny. The amazing duo have already collaborated on four films since 2002, demonstrating their somewhat cosmic connection. After a critically acclaimed directorial debut in which his supporting star Woody Harrelson received an Oscar nomination, Oren Moverman has finally made a follow up to his indie hit The Messenger. Taking a page out of the Scorsese handbook of directing, Moverman once again teams up with Harrelson for his crooked cop tale, Rampart. This time, the result is un-Scorsese-like.

Rampart is set in 1999 Los Angeles where a long time renegade cop named David Brown (played by Harrelson) sees himself pitted against a city of misfits. Refusing to give up his merciless tactics and methods of coercion, Brown ultimately ends up at the center of a videotaped police brutality scandal. With legal fees mounting and his financial state crumbling, the corrupt officer sees no boundary to the lengths he must go in order to survive the ordeal.

Rampart is a cluttered journey into the mind of an unstable police officer. Almost immediately, Moverman introduces the audience to the chaotic personal life of David Brown. With two children born to different mothers (that are also sisters), Brown's unusual home life sets the foundation for the muddled story line and assortment of ideas that is Rampart. Any sense of solace comes at the hands of the film's leading star, Woody Harrelson. Even with the aid of such a gifted actor, Harrelson still only manages to make this jumbled mess a moderately tolerable experience. Furthermore, David Brown's character has a sense of charisma that should have been utilized differently to impact the story. However, rather than attempting to humanize the corrupt officer, Oren Moverman creates a completely unlikable protagonist. In doing so, the director unsuccessfully sends the movie in a dark, downward spiral of unspeakable depths. Therefore, Rampart is a depressing tale that offers very little reward.

Despite the film's disarrangement of ideas and structure, Rampart does prove to be mildly entertaining. Harrelson's onscreen effectiveness unquestionably captivates the audience. And since his character knows no boundaries, this tiny little fact disallows the audience to sacrifice its attention. All eyes will stay peeled to the screen for the film's 108 minute duration, yet Rampart's final moments are perhaps the most dissatisfying. Hence, be warned. There's no light at the end of the tunnel here.

For me, Rampart was love at first theatrical trailer. As previews often do, Moverman's tale of corruption seemed too good to be true. And with the amazing success of his first collaboration with Harrelson, the possibilities were endless. However, Rampart is a below-average and clueless effort. If you're expecting an action-packed thrill ride revolving around a crooked cop (much like Training Day or The Departed), you're in the wrong stratosphere. Rampart loses its purpose early on and, unfortunately, never finds its way back.