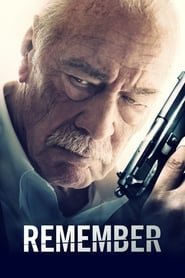 One of the rare gems hidden deep in the lineup of the 2015 Philadelphia Film Festival was Atom Egoyan's chilling drama, Remember. The film features a recent Oscar winner, 2013 Best Supporting Actor Christopher Plummer (Beginners), who delivers another superb and memorable performance.

After the recent passing of his wife, elderly dementia patient Zev Gutman (Plummer) is reminded by his friend and follow resident at the retirement home, Max Rosenbaum (Martin Landau), about a pact they made. Therefore, with the aid of Max, Zev escapes the facility and embarks on a vengeful mission of locating and murdering the former Nazi soldier who killed their families in Auschwitz during World War II.

Leading man Christopher Plummer gives a spellbinding performance as a befuddled dementia patient dead pressed on carrying out his plan of revenge.  Zev's powerful journey to identifying the Nazi soldier culminates with a gripping and tense finale that stands as one of the finest in recent memory. Benjamin August's carefully constructed script is masterfully brought to life through Egoyan's strong direction, making Remember an unkown gem and one of 2016's most prominent films.