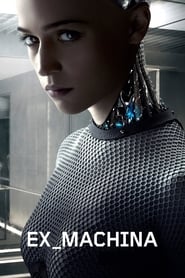 In all walks of life you have to earn your stripes. The same can be said for Hollywood and the millions of big dreamers that flock to Los Angeles for a chance at stardom. Alex Garland is an English author who penned the 1996 novel, The Beach, which you'll probably remember as one of the many titles sitting comfortably in the middle of Leonardo DiCaprio's impressive filmography. Soon after, director Danny Boyle then lured Garland into the world of screenwriting where the author churned out scripts for science fiction films such as 28 Days Later, Sunshine and Dredd. And finally, after a decade-plus of collecting screenplay credits for many well-regarded features, Garland's been given the opportunity to see his own vision through with the directorial debut of Ex Machina.

Domhnall Gleeson stars as Caleb, a promising young programmer who wins a competition at his work to travel to the remote estate of the CEO to assist with a groundbreaking new project. After Caleb arrives to the lavish home of Nathan (played by Oscar Isaac), he's forced to sign a non-disclosure agreement and then introduced to Ava (Alicia Vikander), a human-like robot with remarkable A.I. capabilities. Caleb must spend one week's time with Ava, monitoring her behavior to determine if she's able to demonstrate consciousness indistinguishable from that of a human.

Alex Garland's Ex Machina is a cerebral sci-fi thriller that wastes no time jumping into the story. The writer/director displays the type of subtle attention to detail that you'd certainly expect from a novelist, and it translates to the screen with unfettered ease. Ex Machina wraps a mysteriously sexy and provocative outer layer around a cleverly-constructed centerpiece. Manipulation and slight of hand keep the audience guessing throughout the trio of characters' week-long journey together. The cat and mouse games between creator and robot take their toll on Caleb, and Domhnall Gleeson displays a naturally deteriorating psyche to perfection. The former rom-com star of 2013's underrated work, About Time, proves he has the range to tackle any role handed to him. But equally impressive is the onscreen ability of the A.I. subject, Ava, played remarkably by Swedish actress Alicia Vikander. She truly captures the mystifying essence of Ava and finds a faultless balance between man and machine.

With excellent writing and exceptional acting on all fronts, you'd be hard pressed to find issues with Ex Machina. However, some do exist. The film's mid-section suffers from pacing issues that create a sluggish feel up until it's conclusion. But then, Garland nearly spoils a spine-chilling finale by refusing to end the movie at a climactic moment. Regrettably, the director pushes on for another five minutes or so in a less than gratifying result that allows the tension to dissipate. These aren't by any stretch detrimental flaws, but rather minor blemishes to an otherwise very impressive debut feature.

Ex Machina is a thought-provoking and compelling sci-fi entry that relies solely on intelligent dialogue and soulful performances. The beauty of Garland's work is its ability to transcend the stereotypical dependence on gaudy special effects and eye-popping visuals. Ex Machina is full of the substance and wisdom that turns blandness into art.