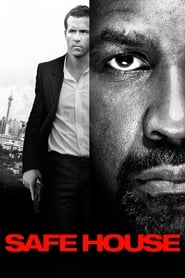 I spent a significant part of my childhood idolizing the work of mega-actor Denzel Washington. Although I've never been much of an action junky, there was just something about the 1991 film Ricochet that had me hooked. Pitting a young Denzel Washington against the revenge-seeking and villainous John Lithgow, it was pure magic. Fast forward more than 2 decades and Washington is still known for taking center stage in countless heart-pounding action movies. But Denzel's latest effort Safe House, in which he stars alongside heartthrob Ryan Reynolds, plays more like his early 2000's work Man on Fire and Out of Time, it leaves much to be desired.

The film follows a young CIA agent named Matt Weston (played by Reynolds) who mans a safe house in Cape Town, South Africa. Desperate for a chance to prove himself to his superiors, Weston gets more than he can bargain for the moment the CIA's most wanted rogue agent, Tobin Frost (played by Washington), arrives at his location. And when his safe house isrecklessly attacked by mercenaries, Weston will go to no end to keep Frost detained.

Directing his first American film to date, Daniel Espinosa's Safe House is a meandering attempt at film making. Bogged down by an unforgivable script, Safe House is an obvious disappointment. Rather than spending the film's runtime developing its plot and characters, Espinosa trades depth for gun fire and fight scenes. What makes this scenario so unfortunate is the fact that, at its core, Safe House offers some interesting ideas. However, the movie never takes the appropriate steps needed to derive the story and, as a result, ends up feeling all too flat.

Despite its poor script and directorial execution, Safe House manages to remain somewhat bearable thanks, in large part, to its cast. Denzel Washington and Ryan Reynolds prove to be stellar once again in their respective roles. Yet, no matter how strong of an effort the talented pair of actors and their co-stars give, it seems as though all of the movie's characters are non-apologetically misused. To its discredit, instead of building off of its own premise and characters,Safe House takes the wrong approach by desperately attempting to measure up to big time action films such as The Bourne franchise.

With a runtime knocking on the door of two hours, Safe House's initial intrigue and natural flow quickly wear thin. The overabundance of gun fire and combat scenes leave the action film feeling surprisingly drawn out. All in all, there's far more potential than there is resolution, as Safe House clearly deserves a better fate. However, it's evident that even the feature's strong cast and crafty plot twists are completely mishandled. As you can guess, I suggest keeping a safe distance from all things Safe House.