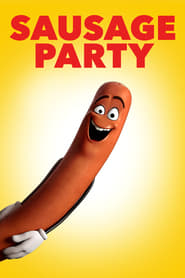 It was love at first sight when I stumbled across the debut red-band trailer for Seth Rogen and Evan Goldberg's latest stoner comedy, Sausage Party. From the same minds that delivered comedic gold such as This Is the End and Superbad, this new animated feature tackles the clever perspective of food and everyday household items living within a giant grocery store. And even though I possessed the loftiest of expectations for Sausage Party, I couldn't help but leave the theater satisfied with this summer's biggest breakout comedy.

Frank (voice of Seth Rogen) is a packaged sausage living inside of a grocery store beside the bun of his dreams, Brenda (Kristen Wiig). While the star-crossed lovers patiently await their selection from the human "gods", a bit of a mishap sends Frank on an existential journey to discover the true meaning of life. He eventually learns the truth behind what happens when food leaves the supermarket, and Frank must work to warn everyone in the store about their impending doom.

Although Sausage Party milks every drop out of its R-rating as possible, simply labeling it as a raunchy and vulgar animated comedy is inadequate on so many levels. Sure, the film pushes the envelope with countless scenes, including a mouth-dropping finale that's unlike anything you could ever imagine. Yet, there's a large level of creativity at the core of Seth Rogen and Evan Goldberg's adult-only animated feature. By poking fun at spirituality and religion, in addition to human intolerance for one another, Sausage Party's edgy humor is both poignant and purposeful. The film definitely has plenty to say, even if uses an outrageous premise and fills space with highly sexualized humor. Some moviegoers will certainly take offense to Sausage Party's over-the-top approach, but if you manage to look beyond the copious amounts of superficial immature jokes, you'll find a deeper story that's actually quite insightful.

Lead characters Frank and Brenda aren't the only two that steal the film's screen time, numerous other quirky characters help bring the story to life. However, one character that's unnecessarily shoved down our throats is an ineffective pseudo-villain, the cleansing douche (Nick Kroll). His initial appearance is packed with quality laughs, but as he dominates more and more of the film's running time, the character continually reveals itself as an inadequate space-filler. And as I have mentioned before, Sausage Party's closing sequence seems to exist for no other reason than shock value.

Seth Rogen and Evan Goldberg's imaginative animated comedy isn't without its flaws and blemishes, yet the duo manage to generate a bulk of hysterical laugh out loud scenes. If you're a fan of their prior work, Sausage Party will feel like a refreshing new direction for their brand of stoner-humor. Yet, if you've found their previous writing to be tasteless and underwhelming, you'll probably identify this newest effort as infantile. However, from a big-picture perspective, there's an enormous amount of creativity, craftiness and intelligent humor to help make Sausage Party the must-see comedy of the summer.