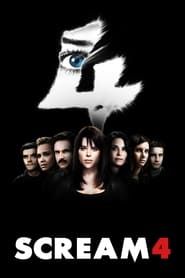 While having a pair of minor surgeries over the past two months, my movie going has been kept to a minimum lately. And after finally feeling "up to it", my first choice was to see Wes Craven's Scream 4. At my root, I'm an avid horror fan. The genre helped spark my love for cinema. As a youngster I grew up on the classics (which almost all have had terrible remakes of late), but my youth lacked a new, fresh, and innovative approach to scary movies. Enter Wes Craven and 1996. The original Scream was, by no exaggeration, a masterpiece. Both scary and cleverly crafted, it helped reinvent the horror genre. Unfortunately for Craven, however, the film's second and third installments were both major disappointments. With the only question being, will the director's fourth vision hold up?

A little over a decade after her last attack, Sidney Prescott (Campbell) has attempted putting her troubled past behind her through her new self help book. When she returns home to Woodsboro for a book signing, local sheriff Dewey Riley (played by Arquette) informs her that a copycat killer has struck again. This new killer is using the original as a model, but with a whole new set of rules. This leaves everyone at risk, and more importantly, everyone's a suspect.

Scream 4 starts out in a very strange way. I won't give out any details, but the opening sequence is unique, yet inefficient. I found it to be confusing until I finally wrapped my head around everything. And once you inevitably get the point, you're unamused by its delivery.

Once the movie gets going there are plenty of ups and downs with the film. For true horror fans, you'll find plenty of enjoyment in Craven's stylistic approach to the murder scenes. They give off a slight hint of recycled goods, but they're much better than what we've grown accustomed to lately. Furthermore, similar to his original creation, Scream 4 has a handful of scenes that really get your brain running rampant in detective mode. In fact, one of the true bright spots of the film is Craven's ability to craft a taut, "who done it" story. For the most part, the film will surely leave you guessing.

Despite some obvious positive attributes, Scream 4 falls apart in many areas. For starters, the movie would have greatly benefited from NOT including Dewey and original character Gail Weathers (played by Cox Arquette). Their overly animated characters and storylines took away from the strongest areas of the film. Craven falters by forcing some old characters into a new brand. Had he ditched the old timers and added more emphasis to the new crop of characters, it would have given the film a greater lasting effect.

Furthermore, Scream 4 has an obvious ending problem. Often a point of concern in Craven's history, the director once again ineffectively concludes his film. Trying to do the movie justice, he actually creates a less powerful ending. The story called for a different resolve, and unfortunately Craven forced it in another direction.

The acting was sufficient and the mood was appropriate, but little details kept Scream 4 from being an elite horror film. It was entertaining (despite some cliche dialogue every now and again), but ultimately, Scream 4 is no match for its original. If you want to see a decent horror movie for a cheap scare, get to the theatre. If horror's not your thing, you won't miss much here.