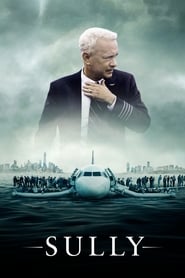 Although it will most likely come away empty handed at the Academy Awards, Clint Eastwood's Sully justifiably kicks off the fall Oscar season with a thunderous crash. And considering the Hollywood icon's previous three films have centered around sharpshooter Chris Kyle (American Sniper), musical group The Four Seasons (Jersey Boys) and the most controversial FBI Director in U.S. history (J. Edgar), another biopic only seems fitting for Eastwood's latest work. By keeping things short and to the point, Sully resides as another strong effort from an industy legend.

On the fateful morning of January 15th, 2009, nothing could have prepared pilots Captain Chesley Sullenberger (Tom Hanks) and First Officer Jeff Skiles (Aaron Eckhart) for their career-defining flight. Shortly after take-off from LaGuardia Airport in New York, their plane encounters a vicious bird-strike that results in the loss of both their engines. And despite air traffic controls' repeated suggestions to return to a nearby airport, Sully diverts the plane for a forced water landing on the Hudson River. Yet, following his heroic split-second decision and skillful landing that saves the lives of everyone on board the plane, the NTSB valiantly attempts to tarnish the pilots action's with their investigation of the incident.

Sully is an intense spectacle that begs to be witnessed on the big screen. Eastwood has the audience holding its breath and bracing for impact as Flight 1549 rapidly loses altitude and makes a b-line for the Hudson River. The film captures the fear and anxiety of that brief moment phenomenally. However, Eastwood's primary focus is on the days following the incident, where the lead pilot struggles with the inner turmoil of second guessing whether or not he acted in the safest way possible. It's here where Tom Hanks delivers another fine performance that doesn't quite stand up against his career best, but one that certainly keeps the film intact. Co-star Aaron Eckhart provides ample comic relief throughout a rather emotional and intense ride. Eckhart's work proves to be one of the finest supporting turns I've witnessed this year and should land him in the Oscar discussion. From start to finish, Sully is a well-executed and brisk birds-eye view of the behind-the-scene struggles facing these media-driven national heroes.

Despite the film's visual prowess and strong acting, Sully displays weaknesses in a few obvious areas. The dialogue is a bit preachy as it constantly tells the audience how dangerously and quickly the entire ordeal went down. These constant verbal reminders are completely unnecessary as the perfectly captured descending airplane scenes already make those points abundantly clear. Furthermore, the scope of the story is so narrow that Eastwood somewhat overuses the plane "crash" as a means to consume screen time. All together you witness the "crash" from the perspective of the passengers and flight attendants, as well as the pilots, in scattered fragments throughout the first two acts. Finally, in a suspenseful finale, the audience relives the moment in its entirety once again. In fairness to the film the intensity never wavers, even after a third go-around. Yet, the continual reliance of this narrative device becomes telling of the shortcomings surrounding the film's intended focus.

I never lose sight of the remarkable ability for humans to come together in moments of distress. Sully addresses this beauty of the human spirit and it makes for an emotionally uplifting resolution to the film. Couple that with Sully's stunning visual representation of the ordeal and the performances of Hanks and Eckhart, and this film concludes as another winning biopic from director Clint Eastwood. It's not quite at the caliber of American Sniper, but Sully is definitely a strong film all in its own right.