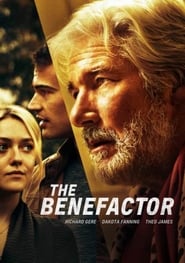 One of my targeted films during this past October's annual Philadelphia Film Festival was director Andrew Renzi's debut, The Benefactor. Not only was the movie set and filmed locally in the City of Brotherly Love, but The Benefactor also boasts an intriguing level of acting talent which includes Richard Gere, Dakota Fanning and Theo James.

Franny (Gere) is a wealthy philanthropist who unexpectedly loses his best friends in a tragic accident. Years later the deceased couple's daughter (Fanning) returns to Philadelphia with her new beau (James) and Franny graciously welcomes them back with lavish gifts and an overstepping friendship. And as the older man continues to sandwich himself in their lives in hopes of recapturing the past, Franny's darkest demons begin to surface and paint a broader picture of his troubled life.

The Benefactor is an aimless feature that continues to lose touch with the audience following each and every wandering step it takes. To the film's credit, though, leading star Richard Gere delivers a memorable and charismatic performance as a wealthy but frail individual who spirals further into an eye-opening world of addiction. There are some gripping and harsh moments sprinkled wonderfully throughout The Benefactor but, unfortunately, they become lost in the wider scope of the film.