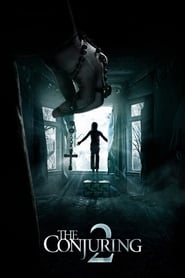 Horror guru James Wan, pioneer of the Saw, Insidious and The Conjuring franchises, has nothing left to prove in the genre that he's helped mold. Perhaps that's why the director has shifted his focus of late to films like Furious 7 and the upcoming DC superhero tale, Aquaman, which is slated for a 2018 release. But despite Wan's clear eagerness to branch out from his horror roots, the filmmaker welcomes his latest endeavor, The Conjuring 2, to theaters all across the country.

Years after helping the Perron family survive an evil terror lurking in their farmhouse, Ed and Lorraine Warren (Patrick Wilson and Vera Farmiga) gain worldwide acclaim for their paranormal investigations into the famed Amityville murders. And with their deeper journeys into the realm of demonic spirits, Lorraine expresses her desires to put an end to the family business before something terrible happens to them. However, a new dark and powerful force haunts a single mother and her four children in their London home, which prompts Ed and Lorraine to tackle one more case.

After directing the first pair of Insidious films, and now a double dose with The Conjuring franchise as well, we've seen about all we can from Wan's deep collection of scare tactics. As a result, the only distinction between these similarly themed movies is the underlying story being told. In the first installment of the series, Wan did a spectacular job of interweaving the Warren's storyline with the family being haunted. The connection was smooth, straight-forward and right to the point. Yet, The Conjuring 2 delves deeper into the emotional and psychological state of the Warren family and how Lorraine's inexplicable ability to connect with the paranormal has become a burden to them all. Therefore, the minutes begin to accumulate rapidly and what transpires is an over-extended and inexcusable 135-minute affair that's every been exhausting as it is scary. Make no mistake about it, though, Wan is an exceptional director with a knack for clever camera work. However, The Conjuring 2 suffers mainly from a recycled sense of scares and an overly ambitious plot-line that loses its credibility with every twist and turn.