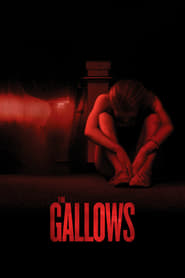 We all hoped it was just a phase, but unfortunately the "found footage" filming technique doesn't appear to be going away any time soon. Love it or hate it, The Blair Witch Project pioneered the movement just before the turn of the millennium in 1999. And what once began as an innovative method of story telling and pseudo-realism, has since spiraled out of control and plagued the modern horror genre. Yet, if the biggest blunder surrounding the latest scare-filled release, The Gallows, resides in its first-person camera approach, then we should all be thankful.

Twenty years have passed since drama student Charlie Grimille died tragically as a result of a prop malfunction during his high school's play, "The Gallows". And after a long hard-fought battle with the school board, the present day drama class is reviving the show. However, its leading man, Reese, barely knows his lines and is bound to ruin the entire production. That is, until his best friend Ryan convinces him to save face by breaking into the school and trashing the set before opening night which would force a postponement. Unfortunately, the ghost of Charlie has different plans and the show must go on.

On the surface The Gallows appears to be a bit of a disaster. The premise seems almost as shaky as the film's first-person camera style, but thankfully newbie directors Travis Cluff (who also co-stars as the drama teacher) and Chris Lofing take excellent care of their debut effort. In fact, the greatest disappointment surrounding the scary movie is that it could have been even better than it already plays. The Gallows entertains on the shoulders of a cleverly crafted and haunting tale that culminates with a bang. And although the acting isn't top-notch, it's certainly adequate for a film of this genre. Cluff and Lofing develop a truly original idea and execute it shockingly well. While The Gallows is by no means an exceptional horror entry, the movie stands fairly well on its own even after spoiling a portion of its high-end potential.

You may be wondering, where exactly does the feature go wrong? As I stated above, the whole "found footage" aspect is hokey and distracting. This technique has grown to become massively ineffective, and it's a compliment to the filmmakers for piecing together a reasonable outcome in spite of this awful decision. Furthermore, The Gallows takes a while to really get the blood pumping. Considering the film doesn't even reach the 90-minute mark, Cluff and Lofing spend nearly half their running time setting up the story and wasting more than a few minutes in the process. However, once The Gallows gets moving and Charlie begins his vengeance, you're in for a solid treat that makes it all worth the wait.

Despite giving The Gallows my endorsement, I must offer a few disclaimers. Horror movies are habitually ruined in a movie theater setting thanks to audience members who attempt to mask their own fear with untimely laughs and constant banter. To maximize the effects of ANY horror film, make sure you see it during a less crowded time of day or a couple weeks into its release. Because if you view The Gallows under the perfect set of conditions, you'll easily look past the film's unnecessary first-person camera aspect and slow beginning to fully appreciate its original story and intense second half.