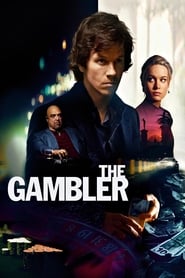 Many aspects of life operate in cycles and Hollywood is no exception. The latest Tinseltown remake comes from Rise of the Planet of the Apes director, Rupert Wyatt, who teams up with Mark Wahlberg in the slightly re-imagined version of 1974's The Gambler. When Paramount originally announced the remake in the summer of 2011, it was believed that visionary Martin Scorcese and his loyal leading star, Leonardo DiCaprio, were in line take on the project. But after viewing Wyatt's unnecessary adaptation, I'm left to ponder what could have been.

Jim Bennett (Wahlberg) is a high stakes gambler who falls further and further into debt in an underground casino ring with his risky and careless betting habits. But after the self-destructive English professor borrows from a second loan shark and offers his life as collateral, his addiction continues to place him on a very dangerous path. And in Jim's mind, his only way out of this mess is to go all-in one final time.

For a brief moment before the film had ever been screened, some insiders gave The Gambler an outside chance at making an awards season splash. However, Rupert Wyatt's effort is far from Oscar contention. Boasting a constrained and soulless script that's drowned in timely cynicism and betting cliches, you can only watch a blackjack dealer flip over cards for so long before you start tuning out, and that limit is reached very early on. Simply put, The Gambler would rather show its protagonist losing than have the audience experience the feeling through a clever and well-crafted character-driven screenplay. As for the film's leading star, Wahlberg's performance is by no means a burden to the overall product, but he isn't a bright spot either. Unlike the 1974 original where James Caan delivers a character that viewers can connect with, it's difficult to tell whether Jim Bennett's lack of allure is a product of Wahlberg's acting, or the result of poor writing and development on the part of Academy Award winning screenwriter William Monahan. Odds are, it's a combination of both.

Thankfully, though, The Gambler offers a saving grace with its long list of exceptional supporting roles from John Goodman, Brie Larson and Jessica Lange. Each do their part to successfully transition Bennett's collapse from scene to scene, and some of the film's finest moments occur when John Goodman takes command of the screen. In fact, the movie would have been much better served opening the door a little wider for these vastly under-utilized characters. Brie Larson is such an emerging talent in Hollywood and, unfortunately, she isn't given the proper platform to work with in the film.

No matter how hard Rupert and his team attempt to offer a slick and cool tale of underground gambling, the final product fails to resonate. The Gambler's biggest detractor is an unlikable protagonist who becomes impossible to connect with for a multitude of reasons. For example, if you're trying to sell a story about an unlikely gambling addict, you should make the character significantly more endearing and vulnerable. Instead, all we're given are Wahlberg's frequent "woe-is-me" rants followed by a careless and unforgiving attitude that repels the audience almost immediately. There's no rooting interest here, so I suggest spending your time elsewhere.