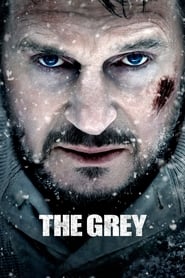 Joe Carnahan's The Grey had me hooked the instant I caught a glimpse of its first theatrical trailer. As a big fan of Liam Neeson in any action role, and an even bigger fan of the idea of watching him pummel some flesh eating mountain wolves, The Grey seemed like a delicate blend of combative survival with a hint of redemption mixed in. After the film's first weekend in release, it topped box office sales with almost $20 million. Couple that with an abundance of glaring critical reviews, and it looked as though The Grey would be a dream come true. But the truth is, be careful what you wish for.

The Grey stars Liam Neeson as Ottway, a depressed man working among oil riggers in Alaska. When Ottway boards a plane to leave the site, he's unaware of the danger that is about to ensue. With only 7 individuals initially withstanding the horrific plane crash, Ottway attempts to lead the group to safety. Struggling to endure the frigid winter conditions and a pack of wolves who view these men as intruders, Ottway and company battle extreme odds in order to survive.

With a theatrical trailer promising massive thrills and countless action-packed sequences, The Grey is an occasional heart-pumping tale of survival. Director Joe Carnahan teams up with his leading star Liam Neeson once again (previously with The A-Team) to provide a similar result. Ultimately, The Grey is a drawn out fiasco that is highlighted by infrequent glimmers of hope. In between these 6 or 7 fiercely intense scenes, the film's poor script and dull pursuit of a dramatic tone becomes far too evident. Losing its sense of focus and appeal, The Grey proves to be nothing more than a disorganized and cluttered display of ideas.

In addition to its lackluster execution, another major downfall in the film is its character development. With hopes of creating an emotional connection, Carnahan tries to lure the audience in by addressing the back stories of certain central characters. However, The Grey's most memorable moments come at the hands of its survival story, not its dramatic elements. It's human nature to want to root for these men to outlive this ordeal. Therefore, Carnahan's inadequate attempt to humanize these characters illustrate the director's unstable sense of direction for which to carry out the film. Rather than incorporating more thrills and keeping the pace of the film moving, Carnahan tries to take The Grey to areas it never needed to venture.

The picture obviously has its fair share of flaws but when The Grey is hitting on all cylinders, it works very well. There are a decent amount of glaring moments that truly amaze, yet they end up serving as a bigger reminder of how good the film could have been. Furthermore, unlike many people who disliked the movie because of its controversial closing scene, I actually enjoyed the film's resolve. The movie's conclusion serves as a satisfying approach to ending the story.

Truth be told, The Grey is a middling attempt at an action-packed survival tale. In between the film's highest points, you'll grow tiresome of waiting for another impactful moment. Despite all of the high praise that the film has received, I'd proceed with caution.