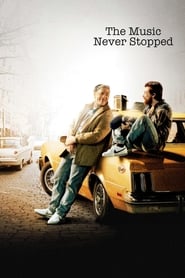 Back in the Fall of 2010 the Philadelphia Film Society hosted an advanced screening of The Music Never Stopped. Every now and again distributors like to test movies against audiences to decide whether or not they should push for a wide scale release. As the film's ending credit rolled the crowd applauded as if it were an Oscar contender. A few months later The Music Never Stopped debuted at the Sundance Film Festival to mixed reviews. Finally, it's being released locally in Philadelphia.

Henry (played by Simmons) and Helen Sawyer haven't seen their son Gabriel (played by Pucci) in nearly 20 years. Ever since the 70s when Gabriel and his father had an argument regarding the young man's future. Wanting the best possible life for his child, Henry expects his son to go college and work towards a respectable career. On the other hand, Gabriel has a deep love for new age "rock music", and he wants to move to the city and attempt a life of music. Back to present day (1990s), and the Sawyer's receive a call from doctors. Their estranged son Gabriel had a large brain tumor removed and he's minimally responsive. Thanks to the help of a progressive doctor, Dianne Daly (played by Ormond), Gabriel returns to some sense of normalcy through the recognition of classic rock music. Desperate to reconnect with his son, Henry must learn to love the same music that once ruined their relationship.

The Music Never Stopped is a powerful tale of redemption. Beautifully acted and well structured, the movie is sure to resonate with all types of audiences. No exaggeration, there were more than a fair share of wet eyes at the conclusion of film. Men and women alike. Simmons and Pucci are both remarkable in their roles, and the chemistry onscreen between the actors is extremely natural and convincing.

I was shocked to hear that this was director Jim Kohlberg's first full length film. Despite a few minor problems, the film is excellent. Some will complain about The Music NeverStopped's "Hallmark movie of the week" feel. Yes it's true, it's a completely uplifting story. There is very little conflict in the film. However, the movie inspires hope and the lack of conflict is barely noticeable. Furthermore, The Music Never Stopped has a seriously slow start. The first half hour is drawn out and hard to get through. Yet once Gabriel begins responding to the music and his character comes to life, the movie never looks back. Kudos to the first time director, and the final product he creates.

The Music Never Stopped is a must see. It's very rare that a movie of this kind can make me feel so emotionally invested, but Simmons and Pucci are sensational. You become so consumed by the story, that even its bittersweet ending is still soothing. Kohlberg's vision translates perfectly to the big screen, and results in 2011's best film yet in the early going.