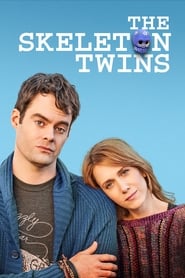 The trend for movies has shifted lately. With depressing dramas crowding movie screens all across the festival circuit, films like Hellion, Blue Ruin, God's Pocket and Cold in July are all recent examples of this phenomena taking over the 2014 Sundance lineup. There's generally a sigh of relief upon entering screenings for comedies, especially one starring Saturday Night Live stars Kristen Wiig and Bill Hader. However, even a laugh-fest such as Craig Johnson's The Skeleton Twins carries a dark and gloomy tone from joke to joke. At this point, I guess we should just expect it.

A terrible set of circumstances brings together twin siblings Milo (played by Bill Hader) and Maggie (Kristen Wiig) after a decade apart. The reunion forces both of them to re-examine their lives and confront their problems, no matter the cost.

At its core The Skeleton Twins never feels like groundbreaking material. However, this murky self-loathing drama whisks along nicely thanks to genuine heartfelt performances from a pair of comedians turned "serious" actors. Bill Hader is given more face time than his counterpart, but Kristen Wiig is equally as effective. With over seven years together on SNL, the onscreen chemistry between these two stars is simply remarkable and their voyage into dramatic acting goes without a hitch. Another welcome surprise is the direction of Craig Johnson. During a long and hysterical lip-syncing rendition of Starship's "Nothing's Gonna Stop Us Now", we see a masterful use of the camera, helping to draw the audience into one of the film's finest moments.

Another glowing aspect revolving around The Skeleton Twins is a more expected one, the film's outpouring of laughs and humor. Watching these estranged siblings instantly regain their lost bond through the use of comedy is absolutely priceless. In fact, almost any scene shared by Hader and Wiig is sure to generate some laughs. But the most fascinating realization is that their innate knack for jokes doesn't seem to take take away from their dramatic execution, instead acting as a complementing force that helps give life to The Skeleton Twins.

There are plenty of reasons to enjoy this film. Outside of the wonderful performances from Hader and Wiig, Luke Wilson gives a standout supporting turn as well. The feature's use of music is great and the story is somber, yet uplifting. While some subplots are more enticing than others and the whole excessive depression bit is clearly played up, The Skeleton Twins leaps over its blemishes and plays as a successful laugh-inducing drama.