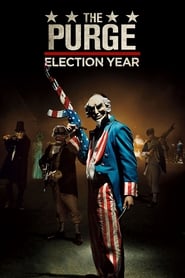 It's difficult to deny the clever premise behind James DeMonaco's horror franchise, The Purge. And following a bitterly disappointing debut in 2013, DeMonaco rebounded nicely with his Anarchy sequel. However, with the recent release of the series' third installment, Election Year, it's obvious that the franchise has taken a step backwards.

Former police sergeant Barnes (Frank Grillo) has become the head of security for politician Senator Charlie Roan (Elizabeth Mitchell), who promises to eliminate the purge if elected. And with the deadly holiday becoming a direct target on the poor, her chances of winning continue to grow as the election approaches. Therefore, the New Founding Fathers of America must use the upcoming purge holiday to execute the senator and eliminate the threat of her campaign.

Election Year continues to expand on DeMonaco's creative idea with a natural progression to the franchise's storyline. Yet, this latest installment misses greatly with a long list of new characters that are never properly developed. And by the time the film wraps up, there's a huge disconnect between the audience and these characters. Hence, Election Year feels like a cheapened version of its previous effort, and a lackluster continuation of the series. Although the finale leaves it wide open to take the saga even further, faith in DeMonaco's franchise seems to be diminishing.