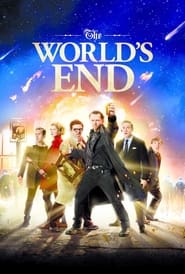 Over the course of the past nine years, writer/actor Simon Pegg and writer/director Edgar Wright have worked together to mold a fresh comedic voice in the industry. With previous overwhelming successes such as Shaun of the Dead and Hot Fuzz, Pegg and Wright return with their third collaborative effort, The World's End. And once again, critics and moviegoers alike are raving about the final product.

Former legend in his own mind, Gary King (played by Simon Pegg), makes a desperate attempt to reunite with an old group of friends in order to successfully complete a drinking marathon that they failed to accomplish 20 years prior. But as Gary and his odd-ball buddies embark on the evening's festivities, the drunken fools quickly discover that they may be the planet's only hope of surviving an alien presence.

Edgar Wright's The World's End is exactly what you'd expect it to be. Fans of his and longtime writing companion Simon Pegg's earlier work will be more than content with their latest film. The jokes are constant and the outlandishness is off the charts. While I openly admit that I'm not the biggest fan of Wright and Pegg's previous efforts (I find them to be a little more mediocre than the general masses), I can recognize when I'm a minority. Don't get me wrong, I am a fan of both men separately. Run, Fatboy, Run can always brighten my day and Scott Pilgrim vs. the World has a rugged and unique style that catches my eye. Therefore, as I watched The World's End, I was upset to find consistent well-written and exceptionally timed jokes fall victim to an overly long and absurdly boring plot. I understand, however, that most other viewers will appreciate the quaint humor and charming characters enough to disregard the ludicrous story that's used to hold the film together.

One of the most impressive facets of the feature is Wright's wonderful cast of actors and actresses. As we all know, Simon Pegg and co-star Nick Frost have the capability to elevate just about any movie they're in. But it's Ray Donovan's Eddie Marsan along with Paddy Considine and Martin Freeman who all shine in their own right and allow The World's End to exceed all of Wright and Pegg's other previous collaborations. In addition to its main stars, the film has one other area that really stands out and surprises the audience. I was shocked by the amount of highly-choreographed fight scenes that were all executed flawlessly. The action is believable and immensely detailed, something I really wasn't expecting to see. However, although the jokes are clever, the performances are strong and the action is a pleasant surprise, The World's End manages to numb the audience with a far-fetched sci-fi twist that clearly makes a mockery of itself by the time the credits roll.

Despite my lack of unfettered love for Edgar Wright's The World's End, it's definitely a film worth seeing if you enjoy his other work. Personally, I demand more in terms of story and effective subplots. Take a chance if you must but consider yourself warned, mediocrity reigns supreme.