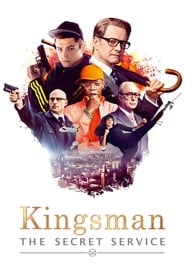 While all of the industry's attention is focused on the fast-approaching Academy Awards showcase airing next Sunday night, February 22nd, a sleek and wildly engaging action extravaganza appears to be slipping under the radar. Based on Dave Gibbons and Mark Millar's 2012 spy-centered comic book series, Kick-Ass and X-Men: First Class director, Matthew Vaughn, unleashes Kingsman: The Secret Service nationwide beginning this Friday. And if you're seeking a crowd-pleasing popcorn flick over this Valentine's Day weekend, then look no further than Kingsman.

When a secret spy organization known as the Kingsmen seek out a replacement agent, the veteran member Harry (Colin Firth) stumbles across Eggsy (Taron Egerton), the son of a former agent who saved Harry's life. Although Eggsy has grown up in a rough neighborhood and attracted the attention of local police, under the tutelage of Harry he begins to realize his own potential. But while Eggsy tries his best to out-duel the other highly qualified candidates for the position, a sadistic technological mastermind named Valentine (Samuel L. Jackson) puts a plan in motion that threatens the entire world.

For as off-the-wall and crazy as it is, Matthew Vaughn's Kingsman is an enjoyable ride. The film flaunts its well-earned R-rating with brilliantly choreographed and stylishly-violent action sequences that never lose their flavor. Channeling its inner James Bond, Vaughn's espionage-adventure features Academy Award winner Colin Firth as a classic gentleman who you wouldn't want to provoke in a bar setting, or anywhere for that manner. Simply stated, Firth makes for an excellent choice, but it's newcomer Taron Egerton who emerges as the film's brightest spot. The youngster is both charming and exquisite in the role of a street kid-turned-spy extraordinaire. Egerton delivers an eye-catching performance that not only solidifies Kingsman as a worthwhile feature, but also shines the light on this blossoming star.

As someone who admittedly knows nothing about the film's source material, there's an influx of characters and events that Kingsman refuses to ignore. Consequently, the feature's 129 minute running time feels like a marathon at multiple points throughout its duration. However, well-timed jokes and phenomenal fight scenes make the lulls completely worth it. One unforgivable aspect, though, resides in a huge plot hole surrounding Valentine's crafty female assistant. Without giving away any spoilers, she somehow manages to avoid catastrophe like everyone else in her similar situation during a pivotal moment in the third act. But despite this obvious blunder, Samuel L. Jackson's speech-impaired villain is hysterical enough to wash away any sour taste this inconsistency brings.

I ventured to my advanced screening of Matthew Vaughn's Kingsman: The Secret Service with mild expectations and left the theater pleasantly surprised. The humor was legitimate, the acting was spot-on, the story was effective and the action was very tasteful. All of these ingredients blend together extremely well in Vaughn's successful contemporary spy adventure, Kingsman.