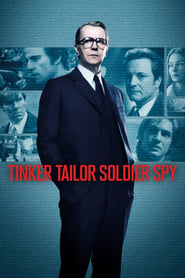 It happens every year. For whatever reason, the stars seem to align perfectly and the delicate balance of giving just enough and not giving too much helps create quite a stir in the movie community. In 2011 Tomas Alfredson's espionage thriller, Tinker Tailor Soldier Spy, has become "that movie". In a year of film that hasn't been overwhelming by any stretch of the imagination, Alfredson's early trailer managed to generate some serious buzz. I mean, what could be more exciting than a Cold War era, who's the mole, spy film starring the vastly under appreciated Gary Oldman? Therefore, on December 9th when Tinker Tailor Soldier Spy began its limited release in the United States, my eager self waited patiently for the British hit and Oscar hopeful to finally make its way to Philadelphia.

Set in 1970's England during the Cold War, the circus (a code name for the British Intelligence Agency) is believed to have a Russian mole somewhere at the top of the chain. The control (the head of the agency) has narrowed his search down to 4 main suspects but after a botched operation in Hungary, the control is forced to resign from his position. A leading government figure passes on the task of discovering the mole to George Smiley (played by Oldham), a retired member of the agency. In order to identify the mole and restore faith in the circus, Smiley must piece together what few facts he has and correctly decide who can be trusted and who can't.

Being sold to audiences as a thriller, Tomas Alfredson's Tinker Tailor Soldier Spy offers very few thrills. The director has every intention of building a suspenseful game of cat and mouse between Smiley and his 4 suspects, yet the attempt falls flat. Unfortunately, the picture develops at a crawling pace and never amounts to the potential it carries. Due in large part to its unfamiliar lingo and lack of proper explanation, at times, Tinker Tailor Soldier Spy can be a difficult film to piece together.

A large saving grace for the movie is its star-studded cast. Lead by the always wonderful Gary Oldman, Tinker Tailor Soldier Spy offers superb acting from each and every first billed member of its cast. And although Oldman is undoubtedly fantastic in his role, Benedict Cumberbatch delivers the most memorable performance in the film. Individually speaking, it's a long shot for Cumberbatch or any other supporting cast member to receive recognition from the Academy, but Oldman definitely stands a chance at a Best Leading Actor nomination. Personally though, I can name (at least) 5 lead performances that are far more deserving of a nomination.

Another major advantage to Tinker Tailor Soldier Spy is the film's strong third act. George Smiley and company's approach to trapping the mole is abrupt but clever. In its closing moments, Alfredson does an extraordinary job of tying together all loose ends with a brief collection of truly powerful scenes. Despite occasional speed bumps along the way, the film's taut resolution makes for a satisfying conclusion.

Tinker Tailor Soldier Spy is far from the masterpiece that many had anticipated. The movie lacks intensity and numerous other entertaining qualities, but the picture does offer a creative story with a fulfilling resolve. This film is by no means a casual watch. Hence, if you're willing to be patient and put forth some effort, Tinker Tailor Soldier Spycan be enjoyed. If not, move along.