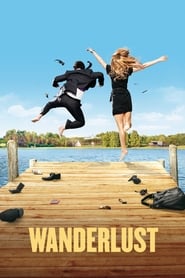 Paul Rudd's once up and down career has blossomed into a solid body of work. Beginning his upswing in 2004 with the instant classic Anchorman, Rudd then followed suit with another excellent supporting role in the hysterical comedy The 40 Year Old Virgin. After a couple more years of successful secondary stints, his career finally took off when he starred in the 2009 smash hit Role Models. A mere three years later, Rudd finds himself once again teaming up with his Role Models director David Wain. But Wain and Rudd are no strangers to one another. The friends and colleagues have worked together on every film that Wain has directed, including his most recent work Wanderlust. Unfortunately though, Wanderlust is no Role Models.

Wanderlust follows a husband and wife named George (played by Rudd) and Linda (played by Aniston) who are struggling to get by in New York City. But when George unexpectedly loses his job and Linda's attempt at a documentary gets turned down by HBO, the couple can no longer afford their mortgage. While trekking to Atlanta to shack up with George's more successful and far more intolerable older brother Rick, the husband and wife discover Elysium. Elysium is a commune-like property filled with dozens of free-spirited members living under the direction of a divine leader named Seth. Although the experience seems far fetched, could Elysium be just the lifestyle that this couple needs?

Wanderlust is an overly simplistic and re-hatched attempt at R-rated humor. The film's story becomes lost behind the overly animated characters that exist on screen. As Wanderlust serves up its obvious plot twists, it becomes apparent how brutally shallow the movie really is. Rarely does a film cause its audience to give up on its leading characters so quickly. Pinpointing the problems in David Wain's Wanderlust becomes a daunting task, mostly because there is so much blame to go around.

In addition to its aimless plot, Wanderlust finds little solace in the performance given by its leading actress Jennifer Aniston. Even though her co-star Paul Rudd is far from spectacular himself, Aniston is simply woeful in the film. With remarkable ease, the actress elevates her already unlikable character to a whole new level. But despite the movie's spotty lead performances, Wanderlust does offer a wide variety of outlandishly comical side characters. With the aid of a few minor roles, there are a handful of laugh out loud moments which manage to keep the film mildly entertaining.

Unfortunately for fans of well written comedic genius, "shock comedy" has become the latest craze. Everything from the bathroom scene in Hall Pass to Maya Rudolph defecating on the street in Bridesmaids, the bigger the shock the better. Wanderlust rides this bandwagon and musters up plenty of frontal nudity (both male and female). But don't worry, I won't spoil the biggest shock of all.

Wanderlust is a drifting hour and a half adventure to nowhere. Centered around over the top side characters and containing very little substance, the film becomes a somewhat purposeless experience. As is the case with any comedy, Wanderlust has the occasional highlight. However, the distant gap between these rare moments is far too difficult to withstand.