Review | We Bought a Zoo
Search 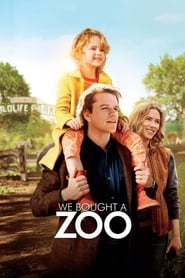 Nothing says "Christmas" like some quality family time. Therefore, it's no big shocker that one of 2011's most anticipated family films will hit theatres just days before the holiday. Cameron Crowe's latest effort, We Bought a Zoo, couples the renowned director with leading actor Matt Damon. With his first picture in roughly six years, Crowe is hoping to duplicate the success of his 2005 cinematic masterpiece Almost Famous. Yet with only a PG rating, We Bought a Zoo will have to attempt it with a few less 4 letter words.

Adventures are nothing new to the world traveled journalist Benjamin Mee (played by Damon). However, months after Benjamin loses his wife, he also loses control of his teenage son Dylan. The boy's inevitable expulsion from school lands Benjamin scouring the housing market. But when the journalist and his daughter Rosie encounter the perfect home, needless to say, the purchase comes with some baggage. Their real estate agent explains that in order to buy the property, they'd have to take on the responsibility of the Zoo that comes with it. Thus, with the aid of zookeeper Kelly Foster (played by Johansson), Benjamin and his family embark on their greatest adventure ever.

With We Bought a Zoo, director Cameron Crowe undoubtedly delivers an enjoyable family film. Wholesome, funny, and often cliched, the movie appropriately does its job of entertaining audiences of all ages. The concept of owning a Zoo makes for a clever story line and Crowe combines the natural humor of the animals with a family desperate for some laughs. Furthermore, set against the backdrop of being recently widowed, the script does a nice job of utilizing the dramatic scenes involving Benjamin and his family to complement the comedic parts centered around the zoo animals. All in all, We Bought a Zoo is a pleasant viewing experience for the entire family.

In addition to the film's solid script and direction, Matt Damon headlines a wonderful cast that helps bring We Bought a Zoo to life. With each character so vital to the success of the movie, the onscreen chemistry of the entire cast becomes remarkably evident. Furthermore, each member of the Mee family is convincing in their respective roles. Mostly stealing the movie is Thomas Hayden Church as Duncan Mee, the over-the-top accountant brother of Benjamin. Church delivers laugh after laugh and he manages to keep the film light and never too overbearing. In her large supporting role, Scarlett Johansson does enough to avoid detracting from the film but never elevates her character to the heights she's intended to have. Yet as a whole, the cast does a stellar job of keeping the movie down to earth and believable.

As always, with a family film comes some deserving criticisms. At times, We Bought a Zoo incorporates its fair share of cliche dialogue and rehashed subplots. In doing so, the movie loses a sense of originality and authenticity. Despite its many strengths, there are still plenty of "been there, done that" moments in the film. All of these mundane aspects hinder We Bought a Zoo from standing out amongst its genre.

Over the holidays, a trip to the movies can make for a great family tradition and We Bought a Zoo wouldn't be a bad choice. Despite its limited ceiling and its lack originality, the movie will certainly entertain you. And if you're looking for a wholesome family film, then look no further. Otherwise, maybe you should set your sights elsewhere.