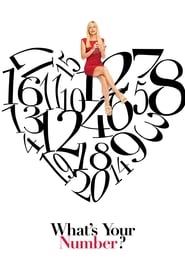 On September 30th there were two nationwide releases that shared two distinct features. Both were comedies and both were rated R. Strangely enough, 50/50 and What's Your Number? both have struggled at the box office. On the flip side, the two films couldn't be further apart. With first time director, Mark Mylod, and a comedic actress who's been struggling of late (yes that's you Anna Faris), it would take a Superhero to catapult What's Your Number? to the next level. Perhaps Chris Evans isn't much of a Superhero after all.

Ally Darling (played by Faris) hasn't found "the one" yet. And when she stumbles across a magazine article claiming that women who have had over 20 different lovers rarely ever find the man of their dreams, Ally starts to reminisce about her past partners. When she discovers she's reached the 20 mark, Ally refuses to sleep with anyone new and asks her neighbor Colin (played by Evans) to help her locate the men from her past. If the article is right, one of the 20 men must be the man of her dreams.

Let me start off by reinforcing the fact that What's Your Number? is an all out chick flick, no shocker there! I have always been a fan of Anna Faris, which dates back to her days in the Scary Movie series (in my defense, only the first two installments). And then she continued to impress me with her work in the under appreciated comedy Just Friends. Despite her past work, Faris continues to decline and it's very evident here. Her onscreen chemistry with cast mate Chris Evans is nonexistent and it deters from the film. Since the leading pair fails to convince the audience, it's difficult for viewers to find much to cling on to.

Although the movie has a less than dazzling cast, What's Your Number? does benefit from a solid script and the occasional laugh out loud moment. There are a few memorable scenes that will leave a lasting impression, and perhaps a better job of casting could have propelled the movie to a more prestigious status. The premise is very adult oriented and quite comical, but the script never uses the R rating to its advantage. The film is rated R but feels like it's more designed for a PG-13 crowd, and this results in an unconventional movie experience.

My soft spot for Anna Faris is dwindling by the day, and What's Your Number? reiterates the fact that she's not the same star as she use to be. Faris once captivated audiences with her outrageous comedic tone, but recently she has failed in her transformation as a sex symbol. Heed my advice and stray away from What's Your Number?, you won't miss much.