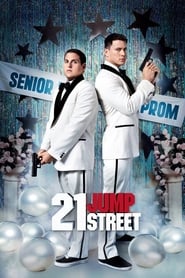 Since the turn of the century, Hollywood has beaten to death the concept of a "remake". What began as a rare occurrence turned into a regularly used marketing ploy with worthless attempts at reintroducing horror classics such as Halloween, A Nightmare on Elm Street, and Friday the 13th. Of late, the "remake" tag has infiltratedour mainstream guilty pleasures. 1980's hits such as Footloose and The Karate Kidhave already been targeted. And now, Hollywood is re-staking claim to the hit television show 21 Jump Street by transforming the idea into a major motion picture. With current stars Jonah Hill and Channing Tatum taking the place of Johnny Depp and Peter DeLuise, 21 Jump Street proves to be a rare remake success story.

Smart and insecure Schmidt (played by Hill) was the type of person popular kids like Jenko (played by Tatum) made fun of in high school. But years after graduation when they cross paths in the policy academy, Schmidt and Jenko buddy up to help each other get through the program. When they botch a meaningless arrest in the park, the duo is reassigned to Jump street. Jump Street is a special undercover unit that places youthful looking police officers in high school settings. And then Schmidt and Jenko are given their first assignment, to figure out the supplier of a synthetic drug that's making its way around an area high school.

21 Jump Street is a winning throwback to the late 80's action television series. First, the remake works so well because of the film's excellent script. Writer Michael Bacall, most known for penning titles such as Scott Pilgrim vs. the World and 2012's Project X, delivers another delightful screenplay. By approaching the story with a hysterical comedic tone, Bacall creates a fun and energetic laugh out loud experience. With likable characters and a modern vibe, 21 Jump Street manages to reach and exceed initial expectations.

Alongside of Bacall's first-rate screenplay is the solid onscreen work of 21 Jump Street's leading men, Jonah Hill and Channing Tatum. Fresh off of an Oscar nomination for his supporting role in the 2011 Best Picture nominee Moneyball, Hill continues his career is a positive direction. And although Hill's role feels all too familiar, he's the obvious benefactor of being able to play a character much like himself. In addition to Hill, Tatum also offers a serviceable performance in the film. Since 21 Jump Street plays more to the action and comedy genres, Channing Tatum adequately masks his otherwise evident deficiencies. Being known for his stereotypical role in dramas like Dear John and The Vow, Tatum works to his strengths and the successful result becomes quickly apparent. Furthermore, every second of Ice Cube's minimal, but outrageously funny, screen time must be recognized. The supporting role is a colorful complement and extremely effective. Despite being far from groundbreaking, the sound performances by 21 Jump Street's entire cast help the final product to shine.

Albeit the film's strong script and solid acting, the remake is far from perfect. The second act softens on the comedy and focuses on the action. By doing so, the movie's flow becomes clearly disrupted. Ample gunfire and fast-paced car chases lead to the picture's yawning midsection. Also, 21 Jump Street's third act is slightly unsatisfying. The film's final moments appear rushed and muddled. Desperate to incorporate some surprises that I'll avoid spoiling, the resolve has a tacky and insufficient feel.

21 Jump Street bursts out of the gate and then lets up as the runtime piles on itself. I would have preferred the feature to avoid the cliche action sequences which bombard its second act, however, there's just enough laughs to get you through the down times. And although the film is nothing spectacular, 21 Jump Street is a hysterically entertaining thrill ride.