Review | This Is the End
Search 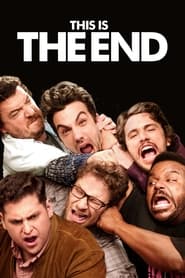 This Is the End
Movie Critic Dave's Ratings
Stars

Seth Rogen's first legitimate major motion picture impact came in 2005's The 40 Year Old Virgin. It's hard to believe that Rogen's stranglehold on the comedy market hasn't even lasted a full decade yet. However, the actor/writer and now director uses his latest platform, This Is the End, to reiterate the fact that he's not quite done yet.

When the longtime friendship between Canadian-born pals Seth Rogen & Jay Baruchel begins to slowly wither away, Baruchel takes one last trip to California to salvage the relationship. Desperate to include Jay in his new group of friends, Rogen invites his childhood buddy to a party at James Franco's pad. But rather than spending the evening renewing their friendship and, from Rogen's standpoint, building new ones, the party full of celebrities must find a way to survive the apocalypse.

Crude, vulgar and downright hilarious, This Is the End is a refreshingly pleasing comedic affair. While some pundits may argue that the film offers nothing more than cheap jokes and excessively immature humor, I would refute that writers/directors Seth Rogen and childhood friend Evan Goldberg stay loyal to their story. Even by the film's satisfying conclusion (prior to the strange cameo-filled finale), This Is the End is a movie about "friendship". Surely the jokes are overtly simple and frequently vile, yet they're also plentiful and consistent. One huge selling point to the comedy is the fact that its characters are based on the real-life actors, actresses and entertainers we've grown to love over the years. In doing so, the cameo's are absolutely hysterical and the viewer becomes transported into the story. Perhaps the finest one comes from Michael Cera. The scrawny and pale actor is uproariously funny playing the party animal role. Cera's brief but impactful cameo is just one of many effective elements in the summer blockbuster.

Despite the fact that This Is the End is a worthwhile flick, its weaker elements certainly can't be ignored. For example, the film's midsection clearly drags on while the plot appears indecisive about where it wants to go. Therefore, the comedy feels every bit of its 107 minute running time. Moreover, since This Is the End addresses apocalyptic themes, there are a great deal of special effects needed to sell the feature. Some are convincing, but many aren't. But although the movie includes a slowly progressing storyline and weak visual effects, This Is the End accomplishes its ultimate goal of generating a plethora of laughs.

The beauty behind This Is the End is the hilarious interaction between its celebrity stars. Danny McBride, Jonah Hill and Craig Robinson all deliver valuable supporting turns that aid in welcoming the moviegoer into the inside joke that is the film. With no shortage of laugh-out-loud moments and a purposeful "message" hidden somewhere in its moderately flimsy story, This Is the End feels like a summer comedy standout. If you find yourself searching for a fun-filled good time, I suggest taking a shot on This Is the End. Just make sure that you go in with tempered expectations.