Review | Barbershop: The Next Cut
Search 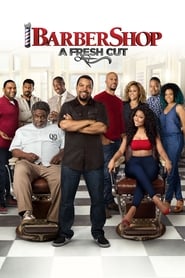 Sequels and new franchise installments are a tricky element to dissect. In some instances they can be rushed into production quickly for studios to cash in on the name recognition, or they may take a decade or two until a follow up film is given the green light. Either way, there's no full proof method of using a time-frame to know whether or not a new entry to a series will be serviceable. Personally, I believe it comes down to how much commitment and care is invested in the overall project. Thankfully, Barbershop: The Next Cut represents a valuable third installment nearly a dozen years in the making.

The film takes the audience back to the south side of Chicago to Calvin's Barbershop, where the owner (Ice Cube) is making ends meet by splitting the rental space four ways with his friends and co-workers. But as the local neighborhood becomes infested with gang rivalries and daily drive-by shootings, Calvin begins to worry that it's time to relocate his business to the north side and remove his teenage son from all of this chaos.

The Next Cut is a refreshing follow-up film that molds together sharp-witted comedy with an insightful fable-like message to the inner city youth all across the country. I have always been a fan of Ice Cube's work, but it's clear that the gifted performer is becoming a respected icon for urban communities, both as an actor and a voice of reason. The old wise African American character is a cliched staple in comedies, but The Next Cut uses Ice Cube's sage wisdom to try and reach the future generation of America. Cedric the Entertainer reprises his role in the franchise and proves that he's still got it. The comedy-infused dialogue is both hysterical and insightful, a true accomplishment by today's standards. And even though The Next Cut over-embellishes its dramatic elements thanks to a PG-13 rating that's a necessary evil, its pacing and positive message reinforce the film as a winning comedy.