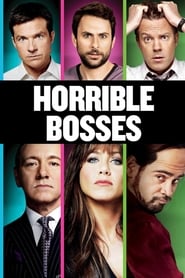 Horrible Bosses, the latest comedy from director Seth Gordon, combines a trio of young comical actors, a seductive Jennifer Aniston, and award winners like Kevin Spacey, Colin Farrell, and Jamie Foxx. What is happening to Hollywood? With such a rare mix of talent and a plethora of critical boasts, I didn't know what to expect from the film. Personally, I found Seth Gordon's biggest release to date, Four Christmases, to be an up and down comedy that fell short of even medaling. The only thing to do was let the movie speak for itself.

Horrible Bosses follows three lifelong friends who find themselves in turmoil at their workplaces. Nick (Bateman), Dale (Day), and Kurt (Sudeikis) all have serious gripes with their bosses (Spacey, Aniston, and Farrell). One night while having a few drinks at the bar, the three friends let their imaginations get the best of them and they half jokingly discuss murdering their employers. When things continually get worse at their jobs, their laughable murder plots take a serious turn. With the aid of a former criminal (Foxx), the friends desperately decide to go along with the plan and put an end to their bosses.

The three young stars Bateman, Day, and Sudeikis are all at different points in their careers. Bateman has been a well established actor making movies for over a decade now, while Sudeikis has only recently taken is Saturday Night Live talents to the big screen as a star of the comedy hit Hall Pass. Finally, there's Charlie Day. Day is a well known face on the hit television show It's Always Sunny in Philadelphia. Day's filmography is bare, and Horrible Bosses is his first true starring role. Sudeikis and Bateman spent a large portion of the film reeling off typical jokes you'd expect from their characters, and Day unfortunately proves to be a type-casted actor. Day can't seem to escape the shadow of his television character Charlie Kelly. Indivually, there is nothing spectacular about any of the performances given by the film's leading actors. In addition, it's highly regarded supporting stars didn't offer much more. Spacey, Foxx, Farrell and Aniston were simply caricatures blown completely out of proportion. Each of their characters were unrealistic, and unbelievable to say the least.

Despite it's mediocre acting, Horrible Bosses offers a hilarious script with solid dialogue. Seth Gordon leaves no loose ends and ties the film together very well. It is a much better job by him the second time around. Furthermore, the movie flies by and keeps you laughing just enough to make some dull subplots seem tolerable.

Horrible Bosses is by no means a groundbreaking comedy or anywhere near an instant classic. Yet, it's a slightly above average comedy that will do its job of entertaining the audience and generating quite a bit of laughter. As long as your expectations are reasonable, this is an easy film to enjoy.