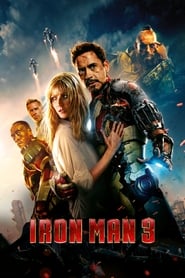 As the first Marvel installment to reach the big screen since last year's billion dollar worldwide box office smash, The Avengers, Iron Man 3 has some mighty big shoes to fill. With a new vision behind this third addition to the franchise, Shane Black finds himself facing the difficult task of outperforming previous director Jon Favreau (who still happens to reprise his role as Happy Hogan). Needless to say, Iron Man 3 begins where The Avengers leaves off. However, playing the annoying little brother in the analogy, Iron Man 3 becomes 2013's first indisputable Summer Blockbuster dud.

After facing off against aliens in The Avengers, Tony Stark's (played by Robert Downey Jr.) psychological battle scars pay a huge toll on his current psyche. Unable to sleep and focusing solely on his work, Stark's relationship with Pepper (Gwyneth Paltrow) begins to take a turn for the worse. But with an outspoken terrorist known as The Mandarin (Ben Kingsley) terrorizing the United States, Stark pushes his relationship issues aside and wages a personal vendetta against the villain.

Completely hollow and overblown, Iron Man 3 is merely a shell of a successful superhero flick. Desperate to follow the same formula as The Avengers, director Shane Black falls well short of expectations. Suffering from an overuse of jokes and prolonged action sequences, Iron Man 3 offers absolutely no substance. While kool-aid drinking fans of The Avengers may brainwash themselves into enjoying the film, this third installment is riddled with flaws. Everything from an over-emphasis on worthless characters (i.e. the youngster Harley Keener and scientist Maya Hansen) to ineffective plot twists, Iron Man 3 is a clear-cut letdown. Even the whole plant and human regeneration idea is a carbon copy from The Amazing Spider-Man. Although there is a serious lack of originality revolving around the feature, the most unconventional plot decision is, ironically, the biggest disappointment. No one can rightfully justify the complete mishandling of Ben Kingsley's character, The Mandarin. It's an unforgivable waste of an immense talent.

Attempting to appeal to younger audiences with insane visual effects and blatantly forced humor, Iron Man 3 is nothing more than a superficial big-budget production. What you see is what you get, and with a remarkable collection of actors and actresses on board, one could only hope for a better result. Instead, we're left with a franchise seemingly in disarray. With other Marvel releases such as Thor: The Dark World and Captain America: The Winter Soldier due out in theatres within the calendar year, hopefully their scripts mark a return to well thought-out ideas and cleverly constructed stories. The cheap laughs and smothering amount of action have become too overbearing and monotonous, to the point where I was legitimately bored at times.

As someone who enjoyed both of Favreau's earlier Iron Man releases (yes, even the second one), I truly wanted Shane Black's latest effort to meet the challenge. However, Iron Man 3 swings for an Avengers-esque fence and can't even get out of the infield. There will be plenty of Summer Blockbusters arriving in movie theatres over the next few months. Heed my advice, you're better off waiting for one of them.