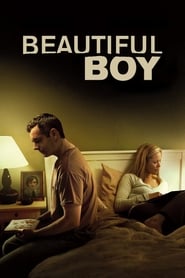 Now that the Cannes Film Festival in France has come and gone, we've gotten an idea of some potential Oscar contenders come Fall. One film that did surprisingly well was a drama starring Tilda Swinton and John C. Reilly called We Need to Talk About Kevin. The film centers around two parents who struggle to cope after the school massacre-suicide committed by their son. This brings us to the movie Beautiful Boy. With a very similar storyline, Beautiful Boy tackles the same vantage point.

Beautiful Boy opens with a college-aged boy reading his poem to his classmates. Quite obscure and somber in its tone, the poem ends and we're introduced to Bill (Michael Sheen) and Kate (Maria Bello). They're a young couple caught in a struggling marriage that's on the brink of separation. Later that evening the couple receive a phone call from the boy in the opening segment. It's their son Sammy (played by Kyle Gallner) who is away at college. Sammy is obviously a shy and quiet young man who feels very distant from his perfectionist mother and emotionless father. The next day news breaks out about a school shooting at Sammy's college. Unable to contact their son, they receive a knock at their door from local authorities who inform them their son is dead. Not only has Sammy died, they also learn that he's the perpetrator.

Consumed by such a dark and depressing undertone, Beautiful Boy challenges the audience to find a glimmer of hope in the story. Maria Bello and Michael Sheen both give strong performances as flawed parents left searching for a reason why. Bello's character is a book editor who feels guilty for pressuring her son with her "red pen" approach to life, and Sheen likewise feels at fault for passing on his suppressed anger to the young boy. As a viewer you ultimately follow them on their quest for answers. However, director Shawn Ku takes us to a greater place.

In life we experience tragedy and remorse more than we'd ever care to. The same questions always seem to follow suit. Why did this happen? How could I have stopped it? Things that really don't matter. You can't undo the past. Ku recognizes this human flaw and carries us over the hump to a gratifying resolution, which is "where do we go from here?" Leaving the theatre it's troubling letting go of the "why" factor and accepting the realization that this couple will overcome the terrible burden they are forced to carry. And in that regard, Beautiful Boy is a moving film.

Shawn Ku has done well for himself with his directorial debut, Beautiful Boy. He crafted a powerful movie and it's sure to affect its viewers. However, as is the case with many dramatic pictures. it can feel punishingly slow at times. The humbling resolve is a redeeming quality. but it's not the type of film you need to see on the big screen.