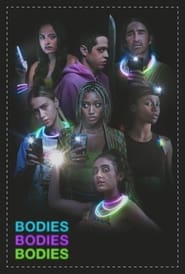 SXSW audiences love a good party, making it no surprise whatsoever that Halina Reijn’s brand-spanking-new, murder-mystery-comedy, Bodies Bodies Bodies, brought down the house at last night’s world premiere. With an endless supply of laughs and enough gore to satisfy slasher-flick fans, this film is the Clue meets Scream mash-up that Xennials and Generation Z so desperately need.

Passion is felt in the opening make-out scene between Sophie (The Hate You Give’s Amandla Stenberg) and her new-ish girlfriend Bee (Borat 2’s Maria Bakalova). Their sweet honeymoon-phase romance is about to take the next step as Sophie brings Bee along to a Hurricane Party with a group of her lifelong friends. Everything begins to unfold according to plan until one of the friends ends up bloody and dead, sending a lethal shockwave of suspicion, paranoia and unearthed secrets to all of the attendees.

Bodies Bodies Bodies breeds energy thanks to a well-paced story, quality performances and sharply written jokes. From early on we can detect the hidden tension between friends and, in some cases, you keep your enemies closer, right? Sophie hasn’t seen her old gang for quite some time, but a desperately needed stint in rehab will do that. Now sober and so outwardly in love with Bee, Sophie tries to fit right back in like the olden days, but it doesn’t fly with everyone. These deep, personal vendettas set the stage for an unpredictable and fun whodunit mystery where the deadliest thing isn’t what you know, but what you don’t know. 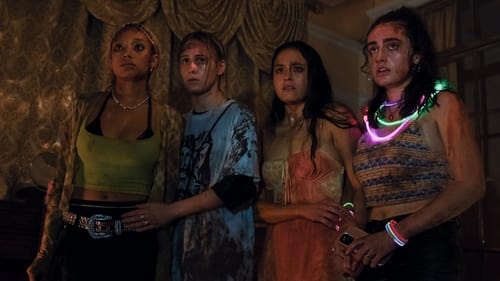 The film’s greatest upside rests in its perfectly-timed humor. While SNL cast member Pete Davidson might be the most expected source of laughter, he’s certainly fine and memorable with his onscreen opportunities, but it’s Shiva Baby’s Rachel Sennott who wins the “Class Clown” award with her unthinkably neurotic one-liners. Bodies will easily find a home with younger audiences, as the reckless party backdrop will surely entice teenage crowds, but it’s not an overly elaborate or matured murder mystery. Silliness resides everywhere, right up until the final moments where everyone’s true colors have been revealed and all questions are answered.

Halina Reijn hasn’t broken any barriers with her second directorial feature, but what she has done is craft an entertaining and hilarious experience that pulsates with energy. Amandla Stenberg and Maria Bakalova’s refined performances bring a much needed dramatic and personal facet to the story that elevates Bodies Bodies Bodies beyond your run-of-mill fatal party anthem to what could be a generational movie staple.