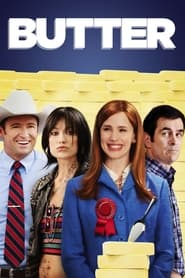 I first came across Jim Field Smith's Butter almost one calendar year ago at the 20th annual Philadelphia Film Festival. As a late entry, Butter's credits rolled to an overwhelming applause by the surprisingly satisfied crowd. Like me, many other moviegoers in attendance really didn't know what to expect from the comedy. But without a doubt, we were all satisfied with one of 2012's funniest unknown films.

Butter follows Laura Pickler (played by Garner) and her butter-carving legend of a husband Bob (played by Modern Family's own Ty Burrell). When the butter-carving community respectfully asks Bob to step away from competition to make way for the next great sculptor, whoever that may be, Laura goes on the offensive and decides to take up the hobby herself. Refusing to give up the glory that comes along with being the wife of the greatest butter carver in the world, Laura enters the competition. In a quest for keeping the gold medal in her family, Laura's only roadblock is an African American foster child named Destiny (played by Shahidi).

As a valiant challenger to Ted as the year's most politically incorrect film, Butter gets by on an over-the top screenplay and a constant ambush of outlandish scenes. The satire is a well paced 90 minute joy ride that never bores. Although the R-Rated comedy progresses nicely, it attempts to squeeze in a rather sentimental side as well. But it's easy to look past the schmaltz and recognize Butter for what it truly is, a fun-filled viewing experience.

Don't be alarmed by the rather poor reception that Butter has received. Despite the lack of critical acclaim, Butter is a hilarious comedy that finds itself alongside some of the year's best. Mainly available on Video on Demand, you won't be let down by this rental. So if you're spending the night sitting in and looking for something funny to watch, I highly recommend giving Butter a chance.