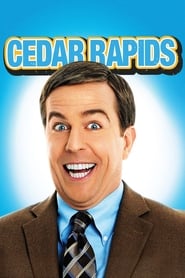 At the beginning of every year The Sundance Film Festival welcomes a wide variety of independent films to the stage. Playing host to countless studio executives, if all goes well, a movie will find itself getting picked up and distributed. Miguel Arteta, director of the new indie comedy Cedar Rapids, was surely relieved to have the backing of Fox Searchlight Pictures before he premiered his latest comedic tale at Sundance this year. However, after having a chance to view the film at an advanced screening, I think Fox Searchlight will have the last laugh here.

Set initially in the small town of Brown Valley, Wisconsin, Cedar Rapids follows a likable insurance salesman name Tim Lippe (played by Ed Helms) as he embarks on an adventure to Iowa's second largest city. After a tragic accident, Tim is selected by his boss to represent their company at the annual ASMI convention in Cedar Rapids, Iowa. The convention gives out an award every year to the insurance company that best serves its community (and god) called the Two Diamond Award. Having won the honor 3 years running, Tim feels the pressure from his boss to succeed. While away at the convention, Tim befriends a wild bunch, namely Dean Ziegler (Reilly), Joan Ostrowski-Fox (Heche) and Ronald Wilkes (Isiah Whitlock Jr). This fun-filled group helps break Tim out of his small town shell, however, they simultaneously start to ruin his chances at winning the award he so desperately needs.

With an all-star cast and a script that keeps the laughs flowing, Cedar Rapids is a comedic joy. Although it's hilarious from start to finish, the film is more than just a collection of funny scenes. There's a real strong plot here. The purpose of the film makes sense and is realistic. All together making Cedar Rapids that much better of a movie. It truly is the total package.

Director Miguel Arteta once again delivers us an awkwardly brilliant main character (much like his last film Youth in Revolt). Only this time, the supporting cast perfectly helps bring the character Tim Lippe to life. Most notable is John C. Reilly's contribution to the film. He's real yet absurd all at the same time. You love him for his sincerity, and laugh at him for his carelessness. Perfectly casted, Reilly truly makes Cedar Rapids work. In his leading role, Ed Helms is everything you can ask for. Unfortunately, the hype surrounding the announcement of The Hangover 2 has inevitably overshadowed the film. However, the people who take the time to see this low budget treat will end up loving Cedar Rapids.

By no means can you catch Cedar Rapids in theatres everywhere. Yet, this fine tuned 86 minutes of laugh out loud comedy is worth the search. So scout it out and make an effort to see the first successful comedy of 2011.