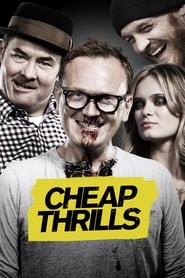 Films have the ability to generate feelings of terror. While many moviegoers avoid the stress and discomfort that goes along with enjoying a solid horror flick or thriller these days, I've always been captivated by stories that examine the darker sides of humanity. Yet, to be a successful film of this kind it requires convincing performances, a compelling story and a unique vision. Serving as a brilliant example to each of the aforementioned components, Cheap Thrills makes its way to Video On-Demand in February and arrives in select theatres on March 21st.

Pat Healy stars as Craig, a family man facing financial difficulties after losing his job and receiving an eviction notice. In a desperate attempt to drown his sorrows at the bar, Craig runs into an old friend, Vince (Ethan Embry), who he hasn't seen in five years. After a few drinks the reunited friends find themselves engaged with a ridiculously wealthy married couple who desire to see just how far Craig and Vince will go for a huge pay day.

In his directorial debut, E.L. Katz delivers a knockout. Cheap Thrills is a twisted and sadistic exploration into the human psyche. Different things motivate different people, but playing off the economic struggles facing Americans every day, Katz illustrates the alarming effects that money can hold over the desperate and financially unstable population. Cheap Thrills dives deep into this eye-opening dynamic and creates a playful dark comedy that balances well with its gripping psychological backbone. Outstanding performances from Pat Healy and Ethan Embry as friends turned money-grubbing rivals help give authenticity to the story. Plausibility is essential to the movie's success, thankfully Healy, Embry and Anchorman's David Koechner keep the wheels churning.

Despite strong acting on all accounts, Cheap Thrills struggles in one noticeable area. The relationship between these old friends is a flimsy, but necessary, subplot to the film. The back-and-forth bickering that gradually escalates between characters as the minutes mount feels unnatural and forced. However, since the rest of the screenplay is very well-constructed, it becomes easy to overlook this forgivable blemish. Also, Cheap Thrills contains a finale that is mildly predictable but perfectly executed. Such a memorable ending leaves a well regarded lasting impression with the audience.

Rarely is a thriller executed with such precision and care. Cheap Thrills offers a not-so-unique premise but pulls together a tasteful blend of dark humor and intrigue to create a fine example of psychological storytelling. With squeamish scenes sprinkled periodically throughout, this debut feature from E.L. Katz must be reserved for those who can stomach it. But if you can withstand some gore, violence and fear-factor-esque challenges, you're guaranteed to enjoy Cheap Thrills.