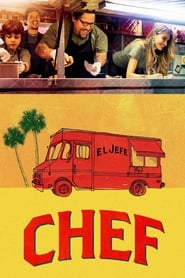 It's safe to say that Jon Favreau's humble, yet significant, career has officially come full circle. After a small onscreen debut in the sports classic, Rudy, Favreau cemented his place in Hollywood as writer and co-star of the 1996 indie hit, Swingers. Almost two decades have passed since Favreau first made his mark on the industry, and since then he's helped birth the superhero franchise, Iron Man, as director of the first two installments and a supporting actor in all three. But how did this gifted filmmaker decide to follow up his bloated career as a blockbuster director? Favreau returns to his roots with Chef, a modest festival darling that's captured the hearts and stomachs of audiences world-wide.

Carl Casper (Favreau) is a culinary artist immensely dedicated to his craft. However, when the most powerful food critic on the internet comes to taste his cuisine, Casper panders to his employer's demands and prepares the same boring menu he's grown to resent. After a negative review of the restaurant drops and leads to a social networking feud that spirals out of control, Casper decides to pursue his creative passion by purchasing a food truck. With the help of his best friend, Martin (John Leguizamo), and young son, Percy (Emjay Anthony), Casper is finally able to discover happiness and piece his entire life back together.

As an Audience Award Winner at this year's Tribecca Film Festival, Chef is a delectable and savory delight from writer, director and star, Jon Favreau. Much like its fresh ingredients sliced, diced and marinated on screen, Chef is a winning combination of various well-executed components. Everything from a heartwarming screenplay, to a brilliant cast and back again to its visionary filmmaker, Chef has all the makings of a sure-fire hit. For starters, Favreau trained extensively in the kitchen with renowned L.A. chef, Roy Choi, and the practice pays off as he both looks and acts the part. But not only is the ambiance authentic in the film, we're also given fine-tuned and carefully constructed characters that add an enormous amount of soul to the feature. Carl Casper lives and breathes a passion for his craft, which is conveyed brilliantly with a meticulous attention to detail by the actor and filmmaker. The audience can't help but share in his love and adoration for the culinary arts and it's a transcending feat. This exemplary element, coupled with a flavorful charm and wit that's unwavering throughout the entire film, transforms Chef into an undeniable treat.

Although the feature is chock-full of redeeming qualities, Chef suffers in two specific areas. One irritating aspect of the film is the continuous references to major social media outlets like Twitter and Facebook. It's fair to say that, at times, Chef feels like a near two-hour advertisement for these digital pipelines. In addition to an astounding amount of product placement, Favreau's indie sensation is given an almost unjust "Hollywood Ending" that feels slightly unnecessary to the central purpose of the film. Yet, to be fair to the movie, this overly sentimental resolution is rapidly tied up with a pretty little bow in no more than three to five minutes. While its miscues are small in stature and forgivable, Chef does a remarkable job of pleasing the audience.

As the summer months get under way and big-budget blockbusters overtake our local theatres, Jon Favreau's Chef stands out as a fine example of top-notch filmmaking. The feature is a premier character study with a wholesome and good-natured moral at its core. Entertaining and easy to enjoy, it's worth seeking out one of 2014's finest offerings.