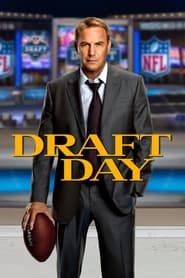 My appreciation for cinema can't be overstated. But if there's one thing I love as much as film, it's professional sports. As a lifelong fan of the NFL and Kevin Costner's sports-centered filmography, I consciously scooted the notion of typical early-year blunders to the back of my brain and welcomed excitement for Ivan Reitman's Draft Day. Yet, there was one simple flaw in my logic that trumps everything. Reitman hasn't been able to direct anything of relevance over the past two decades.

Sonny Weaver Jr. (Costner) is the General Manager of the Cleveland Browns and it's the most important day of his sports career, Draft Day. With an owner (Frank Langella) desperate to make a gaudy "splash" and a coach (Denis Leary) who doesn't believe in his ability to field a winning roster, Sonny must weave and maneuver to rebuild a franchise in disarray. And if these set of circumstances aren't stressful enough for the GM, secretly dating the team's Salary Cap Specialist (Jennifer Garner) is starting to present complications of its own.

According to Harris Polls conducted on a yearly basis, Football is far and away the most popular sport in America. Its hard-hitting product appeals to masses at an ever-growing rate. And more than the Sunday ritual itself, fans continue to develop an interest in the behind-the-scenes aspect of the NFL. Enter Ivan Reitman's latest cinematic dud, Draft Day. The film attempts to be clever in its back-door finagling, but all that remains is an unrealistic portrayal of the NFL's inner workings. The movie crafts an inauthentic and unbelievable atmosphere that throws the entire story off balance. Reitman's final product is both inexcusable and unforgivable, making Draft Day one of the most unsatisfying big-budgeted sports movies in recent memory.

Not only is the feature an inaccurate depiction of general managing, Draft Day also suffers from a weak story and elementary dialogue. Desperate to enhance the dramatics, debut motion-picture writers Scott Rothman and Rajiv Joseph create flat subplots that are simply glossed over and unproductive. The only interesting aspect to the film is its relation to the NFL, which just so happens to be enough to get you to the finish line, but nowhere near enough to leave any semblance of a lasting impression. Draft Day surrounds Kevin Costner with a wide selection of unlikable and often irritating characters that make any connection between viewer and film absolutely impossible.

Outside of a few genuine laughs from Griffin Newman's intern character Rick, Ivan Reitman's Draft Day is a complete miss. The movie's impractical sequence of events and Disney-like conclusion make the experience almost unbearable. When the film reaches the big screen less than a month before the NFL Draft in early May, please don't waste your hard-earned dollars.