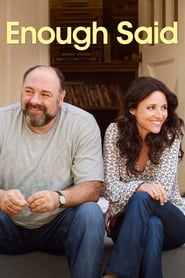 It wouldn't be a stretch to label The Sopranos as the greatest television drama of all-time and Seinfeld the best sitcom. So what do you get when you cross the late-great James Gandolfini with the lovable Julia louis-Dreyfus? The answer is director Nicole Holofcener's affectionate "dramedy", Enough Said. Although it plays out as a heartfelt and earnest relationship tale, it becomes far too simplistic to forget that the film's underlying struggle could be undone with one forgivable admission from the central character.

Separately divorced parents Eva (played by Louis-Dreyfus) and Albert (Gandolfini) can't quite figure out how they'll cope once their children leave for college. So after meeting at a party one evening, the two middle-aged divorcees begin dating and embark on a relationship together. All is well except one tiny detail, Eva's (who's a masseuse) latest client just-so-happens to be Albert's ex-wife. But rather than confessing the revelation to her new love interest and ending the charade, Eva continues the business relationship and begins to see Albert in a different light.

If I were asked to describe Enough Said with only one word, it would be "frustrating". It pains me to sound so harsh with my description, especially because Julia Louis-Dreyfus and James Gandolfini put their acting chops on full display, but numerous aspects of the film are bothersome. Eva's character creates her own misfortunes and irritatingly expects an out-pour of sympathy following her foreseen demise. In addition, it's aggravating that the entire basis of the film revolves around Eva's unwillingness to make the most logical choice in the matter. But if you're able to look past this simple fix that Enough Said is forced to ignore, then there are many decent moments worth enjoying.

One thing that's certain is Nicole Holofcener's latest endeavor works better as a drama than a comedy. Despite being given such a hollow-written character, James Gandolfini's onscreen brilliance transforms Enough Said into a sustainable dramatic narrative. Swindled and ruthlessly deceived, Albert's assumed discovery sets the stage for Gandolfini to shine in the moment, and he doesn't disappoint. Reminding us all of the immense talent that we lost earlier this year.

Despite fine work from a resounding supporting cast comprised of Catherine Keener, Toni Collette and Ben Falcone, Enough Said suffers from an irrational foundation. Either you desire a relationship or you don't. Devious acts of betrayal and tip-toeing around to (not-so) subconsciously ruin the perception of your significant other is flat out nonsensical. Yet, Enough Said strives to be an emotional and hearty film, and it goes there in a roundabout way, but it still manages to deliver on that front.