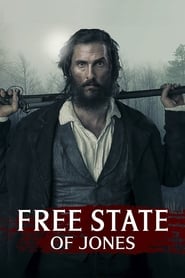 After a surprisingly aggressive marketing campaign that forked over massive bucks to debut its trailer during the Super Bowl, Free State of Jones finally arrives in theaters this weekend. The historical drama brings together recent Oscar winner, Matthew McConaughey, with Seabiscuit and The Hunger Games director, Gary Ross. But despite all of the film's talented cast and crew, Free State of Jones reveals itself as a forgettable attempt at an epic untold tale.

The Civil War divides a nation during the 1860s and Newton Knight (McConaughey) serves as a battlefield nurse for the Confederate Army. While Knight is forced to witness the personal sacrifices of war first-hand, he decides to desert his fellow soldiers and goes into hiding deep in the swamps of Mississippi. During this time Jones recruits countless other deserters who help stand up to the Confederate Army and put an end to the war.

Free State of Jones is a massively outstretched biopic that clouds the legacy of its central character with an overly ambitious screenplay. Matthew McConaughey provides a fully committed performance that easily reinforces his superior talents within the industry. However, film's most monumental moment occurs with almost an hour left to go and makes for a truly anticlimactic experience. As both the director and screenwriter for Free State of Jones, Ross tries to interweave two different stories set generations apart. Yet, neither story is told to the best of its ability and, as a result, the film suffers greatly from this glaring mistake.