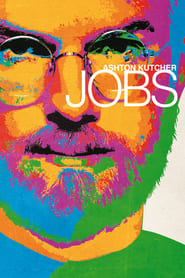 Steve Jobs was, without question, one of the greatest innovative minds to bridge the millennium. But before he was creating the iPod and other fun little gadgets that we enjoy using on a daily basis, Jobs helped change the world by helping bring personal computers to homes all across the globe. Now, less than two years after the passing of the late-great technological icon, Hollywood brings his story to life in the new biopic, Jobs.

Ashton Kutcher stars as Apple founder, Steve Jobs, who goes from college dropout to billionaire. But as you'd expect, no billion-dollar journey leaves a clean trail. Jobs finds himself tangled in a morally-corrupted web of lies and betrayal. And with obstacles at every turn, the innovative thinker will stop at nothing to change the mindset of the world.

Although there are many to choose from, the biggest issue with Joshua Michael Stern's recent work, Jobs, is the directors inability to generate a tone. You can have the greatest actors in the world and the most interesting story imaginable, but without purpose and direction, you'll never have a great movie. Throughout all of the cliche moments and ironically uninspiring motivational-speeches, Jobs fails to find itself. And that isn't to say that a historically mediocre-at-best Ashton Kutcher didn't pour his heart and soul into this role, because it's obvious that he did. It's just that this overly-long and abundantly-bland feature is uncertain on all levels. The film never sets a path of course because Stern appears undecided on whether to vilify his subject matter or honor him. Ultimately, the director attempts to do both and the final result is an insincere and uneven ride.

Jobs is certainly a missed opportunity, but one that doesn't necessarily rest on the shoulders of its predominantly B-List cast. Ashton Kutcher and Josh Gad are most notable as Jobs and his Apple co-founder, Steve Wozniak. Their friendship stands as one of the most interesting relationships examined in the film. As portrayed on screen, Steve Jobs was the vision behind Apple, while Wozniak was the hands-on computer-developer who turned those visions into reality. But outside of those commendable lead performances, Jobs makes the mistake of openly criticizes its subject and showing him as an egotistical and pompous jerk. By taking such an appropriate, it makes humanizing Jobs and rejoicing in his return to glory a difficult sell. One that filmmaker Joshua Michael Stern never quite accomplishes.

Jobs carries a bloated running time north of two hours and only a few interesting plot lines. Many of the film's intriguing angles and stories are left dangling and never elaborated on, making this biopic a frustrating watch. As the old saying goes, "there are plenty of fish in the sea". I'd swim somewhere else.