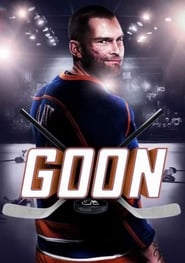 Unfortunately, hockey fans have very little to turn to in the world of cinema. Outside of the 1977 classic sports film Slap Shot and newer movies such as Mystery Alaska, Miracle, and the Mighty Ducks franchise, is there really anything else? Well thanks to writer and co-star Jay Baruchel, Goon is the latest addition to an otherwise barren genre.

Goon follows an outcast bouncer named Doug Glatt (played by Scott) who is searching for his purpose in the world. When his best friend and hockey enthusiast Ryan (played by Baruchel) causes a raucous at an amateur game, Doug comes to his defense and pummels one of the players. Completely blown away by the beating, a local coach gives Doug an invitation to join his team as their enforcer. As he puts more and more of his soul into the sport, Doug discovers that the rink is where he belongs.

With Goon, director Michael Dowse dishes out a respectable vision into the world of hockey. In the vein of the classic predecessor Slap Shot, Goon is a well crafted expedition into the crazed mind of a hockey player. Using the brutality and violence of the sport as a backdrop to develop its main character. Goon's leading star Seann William Scott hits all the right notes with his portrayal of the soft spoken Doug Glatt. Scott creates an undeniably lovable and charming central character that adds many different elements to the film. Without his glowing performance, it's safe to say that Goon would most likely feel flat and unsatisfying.

Alongside its wonderfully developed and perfectly utilized leading man, Goon proves to be a successful sports movie because of its ability to transform a bunch of misfits into a cohesive team. With Goon, there are praiseworthy side characters galore. Everyone from the loose canon goalie to the pair of perverted Russian brothers, and then back around to the recently divorced team captain. There's no shortage of laughs and appropriately used R-rated humor. All of which elevate Goon to the notable modern day hockey film that it is.

As is usually the case, Goon doesn't manage to go from start to finish unscathed. Despite the movie's excellent leading star and tale of team unity, Goon is deterred by the unrelenting performance of its main scribe Jay Baruchel. Annoying to a fault, Baruchel's over the top character ends up ruining some otherwise solid scenes. In addition to Baruchel, Goon also tries to stir up a subplot with a love interest for Doug. As a result, the subplot is mishandled and ultimately forced into the script. Sometimes romance isn't vital for a feature work, perhaps Goon fits that mold.

All in all Goon is a solid sports film that will appeal to the masses. Avid fans of hockey are sure to love the movie, but it's important to state that Goon's hysterical delivery helps elevate the film to a higher level. The film can easily be enjoyed by just about anyone.