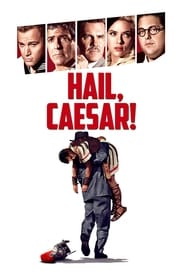 The dynamic sibling duo of Joel and Ethan Coen have already left a tremendous imprint on the film industry. As gifted writers and prolific visionaries who are all too familiar with Oscar acclaim, any entry of theirs is graciously accepted by critics and viewing audiences alike. Oddly, though, Joel and Ethan's latest cinematic work, Hail, Caesar!, lands as an early year release competing in theaters against numerous elite Oscar contenders, something the brothers haven't experienced since they debuted The Ladykillers in March of 2004. But despite their multiple pieces of Academy Award-winning hardware, Hail, Caesar! reveals itself as a comedy-heavy film that's far from the brothers' finest achievements.

Set throughout 1950s Hollywood, Eddie Mannix (Josh Brolin) is a movie executive for Capital Pictures who's known for cleaning up a mess or two (or three). If a director encounters a problem or the acting talent becomes entangled in a poor decision, Eddie arrives to reset the world back to normal. But when the studio's most prominent release of the year is compromised because its leading star, Baird Whitlock (George Clooney), is kidnapped and held for ransom, Mannix begins to question his love for the job while he works to fix this potentially final problem.

Although it suffers from a few devastating flaws, Hail, Caesar! serves as another fine comedic endeavor for the Coen brothers. The laughs are endless and the film's tone is almost absurdly jocular enough to overshadow its blatant disregard for a cohesive storyline. This self-mocking examination of Hollywood and filmmaking in general possesses a certain spark and bravado that eases the viewer to the final credits. Hail, Caesar! engages with a natural wit and humor that's effortlessly provided by a star-studded cast which includes Brolin, Clooney, Channing Tatum, Scarlett Johansson, Ralph Fiennes and newcomer, Alden Ehrenreich. Be warned, though, the film is completely devoid of any dramatic elements whatsoever, making Hail, Caesar! a limited effort from a duo with unlimited potential.

Through no fault of its own, Hail, Caesar! will unfairly be measured beside a long list of exceptional titles previously released by the Coen brothers. And in no way, shape or form can this new entry stack up against hits such as Fargo, No Country for Old Men and The Big Lebowski. Structurally, the Coen's offer a jumbled story that struggles to develop characters and deliver a meaningful message. The film is riddled with random scenes and highlighted moments that work well on their own but fail to amount to a greater whole.

If you're dying for the next great Coen brothers epic, you'll have to keep waiting. Hail, Caesar! is a reasonable comedy that gets by on mild humor and admirably committed performances. Yet, the film falls well shy of the duo's reputable heights which will surely disappoint many. Rushing out to theaters to catch it on the big screen may be a bit rash, but there are still a few reasons worth enjoying Hail, Caesar!.