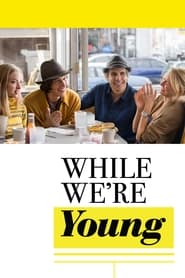 Acclaimed U.S. indie filmmaker Noah Baumbach and I have never really seen eye-to-eye. Over the course of his two decade-long career, I've never encountered a film of his that I truly enjoyed. However, the first-look trailer for his latest comedy, While We're Young, really caught my attention. With Ben Stiller and Naomi Watts at the center of this intriguing cross-generational tale, I was more than convinced to give Baumbach another shot.

When a 40-something couple (Stiller and Watts) finds themselves lost in an evolving world of friends having children and embarking on the next journey in life, they meet a hip young couple (Adam Driver and Amanda Seyfried) that re-energizes their relationship. It doesn't sound like much, but Baumbach's story actually evolves quite nicely and takes a few unsuspected turns in this charming and enjoyable comedy.

With the polarizing Ben Stiller at the film's center, While We're Young rests almost entirely on his shoulders. Yet, the veteran actor welcomes the challenge and gives a praiseworthy performance. Co-stars Adam Driver (HBO's Girls) and Namoi Watts are quite impressive in their roles as well, but it's the unexpected musician, the Beastie Boys' Adam Horovitz (Ad Rock), who will have you asking, "who was that guy". While We're Young gives and earnest examination of life and relationships all while keeping you laughing with a finely executed screenplay which was also carefully handled by the director.