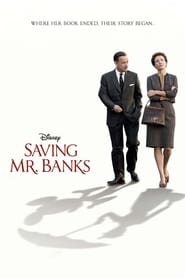 The Academy Awards is certainly vain. The voting body is continually enamored with movies about the history of cinema. Needless to say, Disney's latest biographical feature, Saving Mr. Banks, which couples the legendary talents of Emma Thompson and Tom Hanks in the story of Walt Disney's exhausting efforts to acquire the rights to Mary Poppins, flaunts it's Oscar-baity agenda with dignified pride. My guess, the Academy will once again swoon over director John Lee Hancock's historical account.

When Walt Disney (Tom Hanks) made a promise to his daughters in the 1940s that he would bring their favorite literary character to the big screen, no one could have imagined the struggles he'd endure along the way. After two decades of begging author P.L. Travers (Emma Thompson) for the rights to her famed character, Mary Poppins, Walt brings the financially strapped author to Los Angeles. While there, he must discover the secrets behind the Banks' family and their whimsical nanny in order to entrust Mrs. Travers that her beloved character is in good hands.

John Lee Hancock has suddenly become the poster boy for sentimental biographical films. In 2009 he guided Sandra Bullock to a Best Actress statue alongside a Best Picture Nomination for his real-life adaptation of the Michael Oher story with The Blind Side. His knack for tugging at the audience's heartstrings returns once again in his latest endeavor, Saving Mr. Banks. Yet, Hancock's lucid game-plan isn't the glue that holds this film together, rather it's the Oscar-caliber performances from Emma Thompson and Tom Hanks that make it stick. With these two lifelong masters of their trade, we've been spoiled rotten, expecting nothing but greatness every time they appear on the screen. Luckily for Hancock, his duo delivers at the highest level imaginable, Hanks with his cheery friendliness and Thompson as an argumentative curmudgeon, which clearly elevates Saving Mr. Banks slightly beyond the realm of mediocrity.

Although the film is an indisputable success that will ultimately find itself in the awards season mix, Saving Mr. Banks is flooded with faults. I'll preface by saying that the feature contains a story that isn't overly elaborate, and nor does it need to be. However, along with director John Lee Hancock, writers Kelly Marcel and Sue Smith unfortunately milk everything they can out of this straightforward tale and transform the film into a ballooned 126-minute affair. Saving Mr. Banks meshes together two non-concurrent stories. One pertaining to the childhood of Emma Thompson's character, and the other paralleling those experiences with her "present-day" struggle of relinquishing the rights to Mary Poppins. The portion of the movie that examines P.L. Travers' youth becomes over-extended and nothing more than a weight on the film. Its purpose is understood, but its execution is lackluster. The "present-day" moments throughout Saving Mr. Banks are what the audience will love and remember. Unfortunately, these highlights are broken up in excess by a middling other half of the feature.

There exists a wondrous aura surrounding John Lee Hancock's Saving Mr. Banks. It's comedic elements are a bright complementing aspect to its dramatic nature. However, an abundance of sentiment and a slight mishandling of the story deter from the movie's otherwise glowing attributes. But thankfully, Thompson and Hanks dazzle just enough to keep that spark alive.